Home Politics Zimbabwe Military Will Not Participate in July 31 Protests 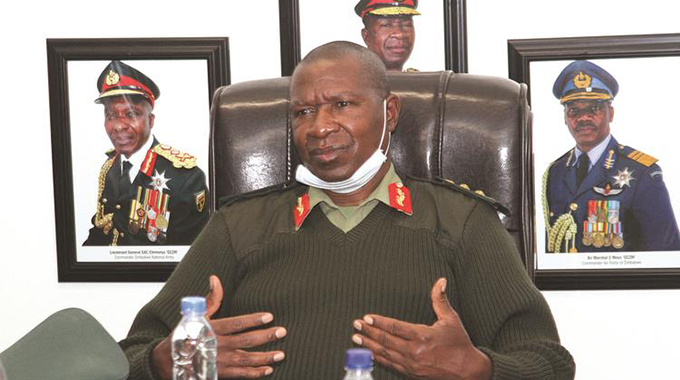 THE Zimbabwe Defence Forces (ZDF) has distanced itself from social media allegations that it is backing a deceitful plan by the opposition to effect regime change on July 31 under the guise of denouncing corruption in the country.

ZDF noted with concern false accusations peddled on social media that it said was intended to cause alarm and despondency.
This comes as security chiefs in June warned of a plot by some opposition parties, working with foreign embassies in Zimbabwe and private media to undermine the authority of the Government, saying that those engaging in treasonous acts would be punished.

In a statement, Defence Forces Commander General Phillip Valerio Sibanda said the allegations are a figment of the social media websites imaginations and not of the ZDF.
“The Zimbabwe Defence Forces (ZDF) notes with concern the concerted efforts by some sections of the private media, which are bent on dragging the ZDF into their political scheming. This is evidenced by an online news item titled, ‘Military backing demo’ published by Transform Zimbabwe on Chimurenga Radio on 13 July 2020. On the same day there was another publication by ZimEye in their article, ‘The army has been used to settle politics’ and that the ZDF and ‘other security structures are literally used to silence, remove and oppress the people of Zimbabwe in a bid to keep ZANU PF in power’. Further to this scheming, ZimEye on 5 June 2020, claimed that the ZDF had helped the MDC-T, led by Thokozani Khupe to reclaim Morgan Richard Tsvangirai House, formerly Harvest House, from the MDC-Alliance.

“These claims and assertions are the work of very fertile imagination of the authors of these articles, which members of the public should dismiss with the contempt they deserve. They are aimed at unfairly using the security establishment to drum up support for their planned illegal anti-Government protests. It should be noted that, as a professional, loyal and patriotic Defence Force, the ZDF does not involve itself in anti-people activities that are designed to achieve anti-Government political and economic objectives by some malcontents within our citizenry,” he said.

The ZDF Commander added that the country’s military is guided by Section 212 of the Constitution of Zimbabwe, which mandates the Defence Forces to protect Zimbabwe, its people, its national security and interests and its territorial integrity and to uphold this Constitution, “and not in shenanigans as those purveyed by the authors of the articles mentioned above”.-Herald