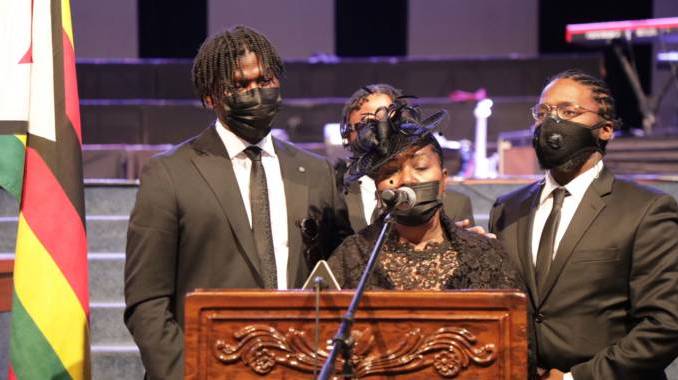 HARARE – The family of the late banker Douglas Munatsi yesterday said they were heartbroken and are still in shock over a fire incident that claimed his life last week.

A memorial service was held for him yesterday in the capital and speakers described his death as a great loss to Zimbabwe.

“He started from zero, I mean zero but he accomplished a lot. He also did so many amazing things, founding a bank,” Harry Munatsi, his elder brother, told mourners.

“I was shocked and surprised to receive the news of his death.

“My heart is really broken. My neighbour came to my house and said my wife was asking why I was not answering my phone.

“At the time, our area had no electricity and I was charging my phone in the car.

“When I rushed to my car, I found 21 missed calls, and I was surprised and before I started dialling, I got a call from my wife and she said, please just rush to the flat.

“Rush now. I am really heartbroken.”

“When I was asked by the president to come and speak, I said but you are aware that he is my brother.

“He said you are the rightful person to go and represent me. I knew him very well.

“We had a very strong relationship.

“This was a fantastic man.”

Information minister Monica Mutsvangwa and her Housing and Social Amenities counterpart Daniel Garwe, government officials and business executives, among many others from different sectors of society attended the memorial.

Munatsi was known mostly for leading BancABC from its formation in 2000.

Police preliminary investigations indicated that Munatsi was not burnt by flames, but by the heat because his clothes were still intact when his body was recovered.

The police have also launched a manhunt for a woman who was recorded on the security checkpoint book as Coleta, believed to have arrived at about 19:05 hours on Sunday and the guard escorted her to the now deceased’s flat.

The occupant of the luxurious flat was top investment banker and chief executive officer of the Zimbabwe Investment and Development Agency (ZIDA) Mr Douglas Munatsi.

It has since emerged that around 2.50am Mr Munatsi alerted neighbours of a fire in his penthouse and called out for help.

Charles Gardiner — one of his neighbours, who is also chairperson of the Northfields Owners Association — was among the first to hear the distress call and duly called the Harare Fire Brigade.

Within 11 minutes of the call, firefighters arrived at the scene.

They took two hours to fight the raging inferno, by which time Mr Munetsi had already died.

The ZIDA CEO will be buried today at Greendale Cemetery in Harare, marking the end of an illustrious life of a pioneering corporate mind and patriot.

Investigations are still underway to find the cause of the fire.

The reporters reached out to the City of Harare’s fire department, who referred all questions to the police.

“All communication on this matter has to come from the police,” council spokesperson Mr Michael Chideme said.

“We are still conducting investigations and if any new information comes up, we will let you know,” he said.

A police source close to the investigation told The Sunday Mail that police are keen to interview a woman only identified as Colleta, who was the last person to see Mr Munatsi alive.

“We are still to account and interview the woman who is alleged to have visited the deceased the night before his death. We are also waiting to receive the report from the Fire Brigade to ascertain the cause of the fire. But so far there is nothing new,” said the source.

The Munatsi family has commissioned a separate autopsy with a South African pathologist as they seek closure.

This publication has gathered that the family intends to compare their autopsy report with one being undertaken by Government pathologists.

Speaking to the media, the Munatsi family spokesperson, Mr Teddy Gazi, said they have lost a family pillar who uplifted many lives.

“He was an employer, educator and benefactor of many close and extended family members.

“He employed many relatives at Kunatsa Estates, Jacob Bethel and while at FMB and BancABC to name a few.

“He was looking after many orphaned and underprivileged children,” said Gazi.

Asked on whether the family suspects foul play, Gazi said they will wait for the report from law enforcement agents before they reach any conclusions.

“The family is grateful and appreciates the State assistance,” he said.

A sombre mood engulfed the ZIDA headquarters this week as Doug’s former colleagues struggled to come to terms with his sudden demise.

ZIDA chief investment and corporate affairs officer Mr Tino Kambasha described his late boss as a person who could bring out the best in everyone.

He said he remembered how they burnt the midnight oil while setting up the inaugural ZIDA secretariat.

“It was very difficult. Remember, he was appointed during Covid-19 and we had to work under extreme pressure. I was the first executive to be appointed at ZIDA, so I saw all the work he was putting in to make sure that the organisation succeeds,” he said.

“I remember when we would work long hours, holding interviews via Zoom seeking the right candidates for the various roles we had. We used to work extremely long hours.”

Mr Munatsi, he said, was gifted with wit and humour.

“He was a happy character, who loved to joke around a lot. Each time he walked into the office, he would bring either a joke or play us a new song he would have discovered,” he added.

Mr Munatsi was a gym and golf fanatic, who dedicated most of his free time to fitness and treading the golf course.

He leaves behind his widow Bindzile and sons Mussa, Bongani and Douglas Jnr.

Investigations are still underway as the police also need to establish the cause of fire through reports from the Fire Brigade and forensics.

After the fire broke out in the penthouse that overlooks Harare Sports Club which hosts international cricket, and the Zimbabwe State House, the Criminal Investigations Department (CID) Homicide section, CID Studios, CID Scenes of Crime, CID Forensics and ZRP Harare Central attended to the scene.

The remains of the deceased were found in a sitting position just beside the bath tub in the main bedroom with some burns on the hands and legs, he was putting on a red T-shirt and a black pair of shorts which were not burnt.

Police sources say there were also some burns on the abdomen, which could have been caused by heat as his clothes were intact.

“According to what has been received, there is no specific cause of death given at this time. It is not common, but it happens. Samples were collected for a toxicology examination to asses whether there were no drugs, alcohol or poison involved,” the source said.

The samples collected are eye fluid, stomach contents, urine and blood, as well as small pieces of other organs of the body. They were given to the police.

“The police are now expected to take the samples for a toxicology examination. The tests used to be done by the National Microbiology Reference Laboratory, which the police has not been using and where some results from as far as 15 years ago have not yet been received. The state also used to send samples to South Africa where results would take between two weeks to a month to be received,” the source said.

“The pathologist also didn’t give an indication on the issue of smoke inhalation, but it has not been ruled out.”

According to the postmortem examination done yesterday, no other sign of trauma was found on the body except for those related to heat. While there had been reports of nails missing from his fingers, further assessment of Munatsi’s body established that there was a nail which had appeared to have been damaged some time before the incident.

It is, however, not clear when the toxicology examination results will be out as the turnaround time and the capacity of the new equipment donated to the police has not yet been established.

Last month, Home Affairs minister Kazembe Kazembe revealed that the courts have been failing to finalise several criminal cases due to lack of forensic evidence.

However, the Zimbabwe Republic Police (ZRP) Forensic Science laboratory last month got DNA (deoxyribonucleic acid) equipment which is used in investigating murder and other violent crimes.

Kazembe said: “The use of forensics to solve the malady of crime in societies has become commonplace. The world over, the use of DNA analysis to solve crimes such as murder and rape, among others, is one area that has registered immense success. Regrettably, the ZRP had been seriously lagging behind in this regard”.

“DNA analysis was being sub-contracted to private institutions, whose charges were prohibitive. The timeous analysis of samples will, indeed, ensure that justice is delivered without delay.