Home Business GameStop: What is it and why is it trending?
Business

GameStop: What is it and why is it trending? 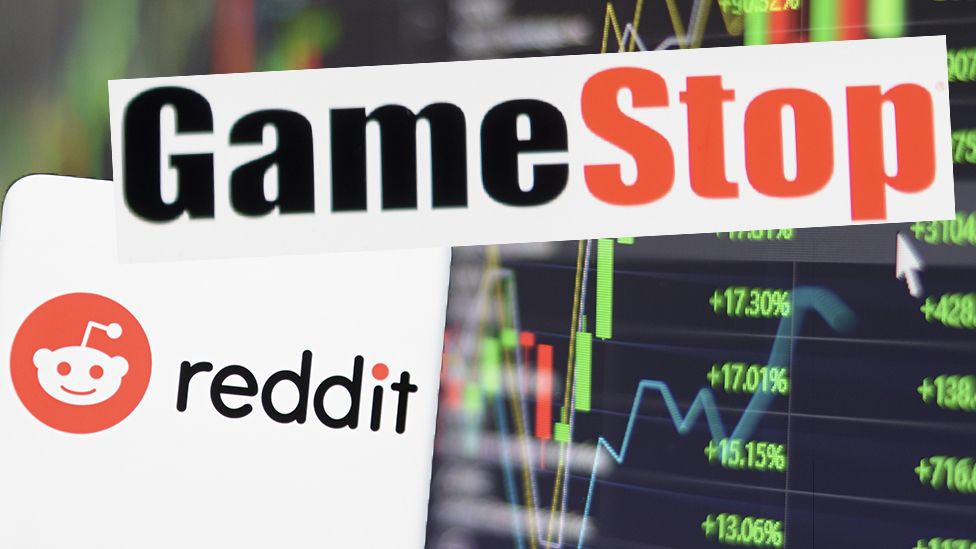 You’ve probably stared blankly at your WhatsApp chat as the words “GameStop”, “Reddit” and “stock market” get thrown around the way “pub” and “meet at 8” used to.

Your friends have become Jordan Belfort from the Wolf of Wall Street overnight, and you have no idea what they’re on about.

Well, we see you slyly Googling “What is a GameStop?” and we’re here to help.

Everyone loves a story of plucky underdogs and sticking it to “The Man” – and this one is a belter.

First, let’s get the basics sorted.

What is GameStop?
GameStop is an American high street shop that sells games, consoles and other electronics.

The sort of thing you’d find between a doughnut shop and a makeup retailer in an American mall.

It’s not anything new and exciting, in fact it wasn’t doing very well because of the pandemic.

You join forums about particular topics you’re interested in.

There are Love Island forums, football forums, history forums – you name it.

The one that’s important in this story is called wallstreetbets. More than four million people are in it, usually discussing stocks and shares and where they’re going to invest money.

Leonardo DiCpario at an awards show for the Wolf of Wall Street
IMAGE COPYRIGHTGETTY IMAGES
image captionThis really is the basics, you’re not Jordan yet
So what actually happened?
Like we mentioned, GameStop wasn’t exactly thriving.

With fewer people out shopping due to the pandemic and most games being sold online, things weren’t looking great for the company.

People who buy and sell stocks often bet on which companies won’t do well in the future.

They borrow shares in the company and sell them, with a promise to buy them back at a later date.

If you’re sure the company will lose value, you’d make a profit when you buy them back and the price has fallen.

Imagine you borrow some Pokemon cards from a mate, because you think the price of them is about to drop, and agree to give them back in a month.

Then you sell them to someone else for £5 per pack.

You work on the assumption that you’ll be paying less than a fiver for them after a month when they’re not so new and exciting anymore. Let’s say you buy them back for £3.

This is a massively simplified explanation of something called shorting, or short selling – words you might’ve seen cropping up in your feeds in the last few days.

Think of it as gambling. If your bet was wrong and the price actually rises instead of falling, you’d lose money.

GameStop amateurs outwit Wall Street
GameStop was one of the companies that loads of hedge funds (companies who do these bets) had bet on to lose a lot of value.

But huge numbers of people in the wallstreetbets Reddit forum swapped tips and bought shares in GameStop.

The demand raised its share price massively, which nobody saw coming, and everyone who had banked on it dropping in value had to buy their shares back.

What’s Elon Musk got to do with this?
Elon Musk
IMAGE COPYRIGHTGETTY IMAGES
The Tesla boss loves a tweet – and when he does, financial worlds tend to take notice. This one-word entry was enough to further send GameStop’s price soaring.

The BBC is not responsible for the content of external sites.
View original tweet on Twitter
line
He also linked to the Wall Street bets forum, where he’s lovingly referred to as Papa Musk.

What was the point of it all?
It’s a good question.

For lots of people involved, it was just a laugh.

Some excitement, something to pass the time with – an experiment to see the power of internet communities.

Wall Street commentators have called it a “phenomenon”, “insane”, and like “nothing [they’ve] ever seen”.

For many, the aim was to make stockbrokers and hedge funds lose money. Popular threads on Reddit include people saying it was payback – taking revenge against the big money companies seen as causing the financial crash in 2008.

Analyst Neil Wilson says some of the traders had a “peculiar vigilante morality”.

“They seem hell-bent on taking on Wall Street, they seem to hate hedge funds and threads are peppered with insults about ‘boomer’ money.

“It’s a generational fight, redistributive and all about robbing the rich to give to the millennial ‘poor’.”

Some people on the forum said they donated their earnings to charity afterwards.

If nothing else, it was a good chance to make some memes.