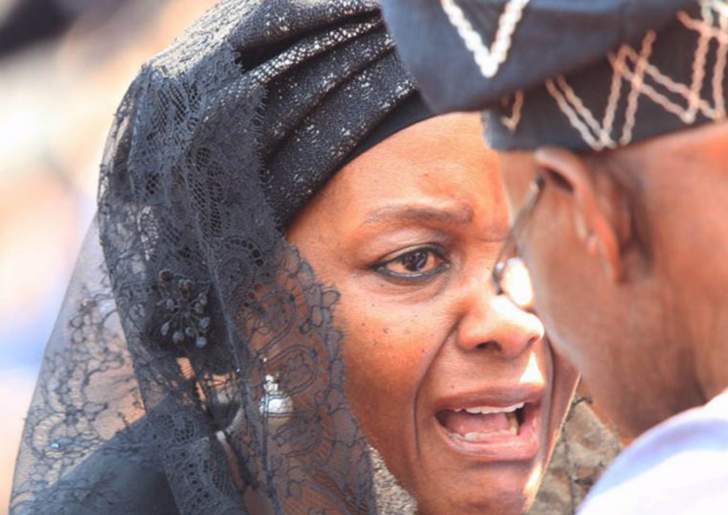 EVENTS leading up to the burial of the country’s founding President, Cde Robert Mugabe, at his rural home in Zvimba yesterday — 22 days after his death in Singapore — betrayed former First Lady Grace Mugabe’s insecurities, political ambitions and scheming, sources close to the former First Family told our Harare Bureau yesterday.

While speculation was rife that inordinate delays and confusing chatter surrounding Cde Mugabe’s final resting place was due to haggling between Government and the Mugabe family, it has since been revealed that heated disagreements within the family, especially between Cde Mugabe’s clansmen and Mrs Mugabe, took centre stage.

She reportedly held out for a burial at the family’s sprawling Blue Roof mansion in Harare, but both the chiefs and elders wanted him interred at the National Heroes Acre as the founder of both the struggle and the nation.

Sources said Ms Mugabe further made a shocking proposal to exhume the body of the Cde Mugabe’s mother, Bona, from Zvimba for burial at Blue Roof as the former President had expressed a wish to be buried close his mother.

However, the former First Lady and her associates came unstuck when it came to the title of the land and the by-laws that govern the residential property.

“Blue Roof is a homestead and not a cemetery, so changing the land use could have been encumbered by the associated legal processes. There was also the issue of the title deeds: Blue Roof is part of properties that were purchased through Zanu-PF’s M&S Syndicate (a holding company for the party’s private and public investments) at the time President Emmerson Mnangagwa was the party’s Secretary of Finance,” said the source who took part in the heated discussions.

After failing to get her way, Mrs Mugabe then pushed for a burial in Zvimba, but those who opposed the suggestion were unyielding. She told Cde Mugabe’s clansmen that burying him at the national shrine amounted to “rewarding the dead and overlooking the living who minded for the former President until his death”. In order to sway the chiefs and elders, she reportedly played them a recording of Cde Mugabe purportedly pronouncing his final wishes.

“Chiefs argued that the recording by Grace lacked integrity: it sounded like a guided conversation. They also questioned Mugabe’s state of mind at the time the purported recording was made — and by an interested party.

The elders also argued that at the few occasions they met Mugabe, he had made it known that he wanted to be buried at the National Heroes Acre.”

They further chronicled how then-President Mugabe overruled the wishes of Cdes Edgar Tekere and Cephas Msipa.

On Cde Tekere, he famously noted that “the dead do not decide where they are buried”.  Further, the chiefs questioned why Cde Mugabe, “would not find rest at the National Heroes Acre”, where he had his first wife, Sally, and his sister, Sabina buried.

One of the elders reportedly broke down during the exchanges after voicing his concern about the manner the body was being kept at home for so long before being laid to rest. Said the source: “They said Mugabe ‘imharuri’ (founder) of both the struggle and the nation and, therefore, ‘could not sink into oblivion’ by being interred away from the national shrine. “This is why they proceeded to mark the grave at the Heroes Acre.”

Faced with a recalcitrant customer, the chiefs left the former First Lady – who was allegedly being urged on by self-exiled G40 members Patrick Zhuwao, Professor Jonathan Moyo and Saviour Kasukuwere – to her designs. Since the death of the former President, the controversial trio were reportedly angling to milk political capital from the wake. In particular, Kasukuwere, who is understood to have been in almost daily contact with Mrs Mugabe, believes he has political gravitas to take over the Presidency from Zanu-PF, which stems from a promise that was once made by the late Cde Mugabe to him during a State visit they made in one South American country.

During the visit, Cde Mugabe reportedly promised to hand over the reins to Kasukuwere, but expressed reservations that he was still young to gain the trust of the commanders in the security forces and senior officials in the revolutionary party. A plan was then hatched to hand over power to Cde Sydney Sekeramayi during the interregnum. However, Cde Sekeramayi was supposed to rule for one term before eventually handing over power to Kasukuwere. It is this belief that is understood to be pushing Kasukuwere and his G40 to entertain the idea of launching a political party that he would lead, deputised by Mrs Mugabe.

“He has a sense of proprietorship over the presidency, which he thinks is the heritage of the former President. . .As for Mrs Mugabe, the plan was to lie low, smile a lot, hoping that ED (President Mnangagwa) is naïve enough, not to know that underneath the smile lay a dagger. They planned to out themselves (politically) with a bang in such a way they thought ED could have never had contained. Fortunately, the State has ears,” said another source privy to the behind-the-scenes discussions.

Diplomatic sources who spoke to our Harare Bureau said the grand scheme reportedly has the buy-in of a former president of Mozambique and the Economic Freedom Fighters (South Africa), who think they can leverage on burgeoning youthful populations in the three countries to assume the levers of power.

“They think residual respect for Robert Mugabe will transcend anger for Ms Mugabe, Jonathan Moyo and Zhuwao, who they blame for ruining the stature of the old man.”  Sources also said there was interesting triangular communication among Mrs Mugabe, Saviour Kasukuwere and Nelson Chamisa, president of the MDC. Central to the ex-First Lady’s fears are concerns over the former First Family’s sprawling real estate empire.

“She fears losing pieces of land that she acquired contrary to the country’s land policies. It has since emerged from the ongoing land audit that the family owns 22 farms, six of which were under the ‘old man’, while the rest were under Grace and her associates,” said another source.

It is understood that soon after arriving from Singapore with the body of the late Cde Mugabe, Mrs Mugabe tried to broach the subject of the properties with President Mnangagwa.  “The President said we are still mourning and we cannot discuss these issues; why don’t we lay Cde Mugabe to rest and then come back and discuss.’’

Meanwhile, Chiefs from the late national hero’s Gushungo clan were conspicuous by their absence during his burial, amid indications that they failed to agree with the family on burial procedures. The only notable figures during the burial were Chief Zvimba Beperere (Mr Alfred Tome) and one only identified as Chief Matare.

Family spokesperson Mr Walter Chidhakwa urged chiefs from the Gushungo clan to remain united but not to interfere with family issues. He said this in reference to the feud between the family and the chiefs.

“As the Gushungo clan of Zvimba we are one. We have Beperere, Mutsedza and Chidziva amongst us. We should remain united, but when it comes to family issues, let us allow individual families to make their own decisions.”-sundaymail