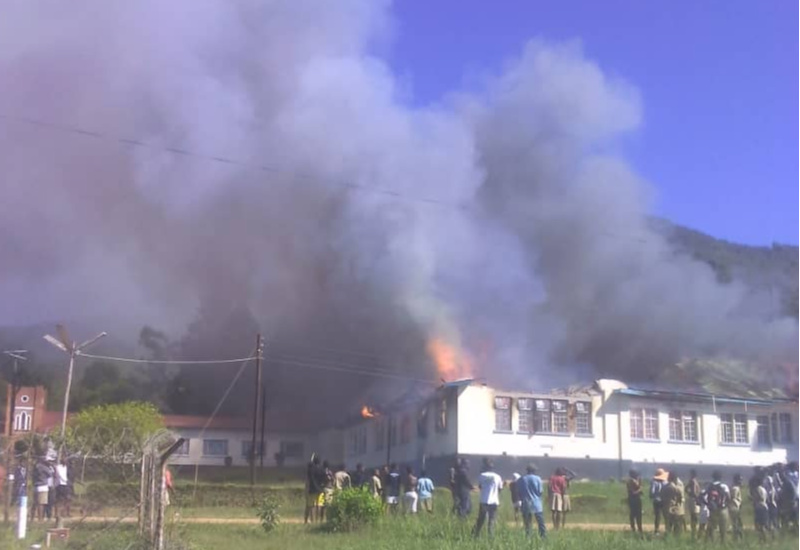 It is understood that a demand by the Advanced-Level pupils to have a separate dining room sparked the violence.

There was pandemonium at the school as the Form Six pupils could hardly be restrained by security guards and staff members who were present.

“What I have gathered from the Mutasa District Schools Inspector is that there was violence on Monday night at Hartzell High School. The issue is still under investigation by authorities at the institution.

“It is not yet clear what triggered the skirmishes, but we were told that a pupil feigned to have sustained a wound by smearing toothpaste on his head, and sent a picture to his parents.

“We were also made to understand that Form Six pupils at the school clashed with their Form Four counterparts, resulting in violent scenes. However, the issue is still under investigation,” said Mr Shumba.

United Methodist Church education secretary, Reverend Munyaradzi Timire yesterday (Thursday), said he could not comment on the matter as he was still to be apprised of the skirmishes.

A well-placed source at the school said: “The issue started with pupils clashing over a girlfriend. A Form Four pupil is alleged to have snatched a Form Six girl from her boyfriend. The boyfriend is in Form Six, and his counterparts felt that they were being disrespected by the Form Fours.

“Things came to a boil on Monday evening after the study period. The pupils clashed resulting in the damaging of the fence, while a few windowpanes were smashed. No one was injured except one young boy who fell during the melee. He was not badly injured.”

Parents with pupils at the institution took to social media platforms registering their displeasure over what they termed as deteriorating standards of discipline at Hartzell High School.

“It is sad that we are witnessing deteriorating discipline standards at the school, and yet we have authorities who are being paid to ensure our children are safe. We heard that a teacher at the school was recently manhandled by pupils, and up to now we are yet to hear the outcome of that case,” wrote one parent in a WhatsApp group.

Another parent wrote: “It is clear that these Form Six pupils were under the influence of something.

“My opinion is that there is rampant drug abuse that is not being curtailed within the school because such incidents will not happen just like that.”