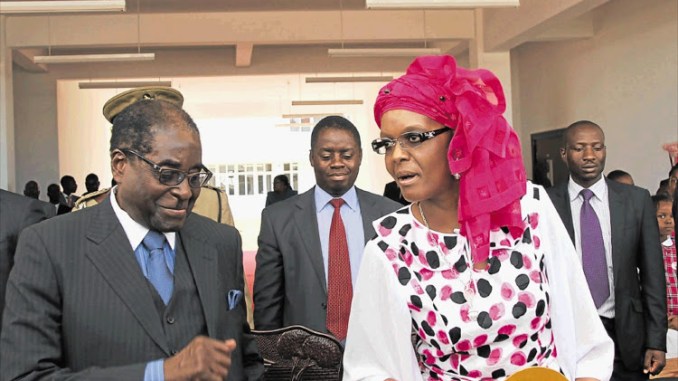 FORMER First Lady Grace Mugabe yesterday said the first thing she searched for in the late President Robert Mugabe’s bedroom was evidence of juju after wide speculation that the long-serving ruler depended on powers from the occult.

Grace, who married the late Mugabe in 1996 after the death of his first wife Sally, told representatives of several charitable organisations gathered at her Mazowe Children’s Home, that before she fell in love with him she would hear stories that he used lion fat.

“People said he uses mafuta eshumba (lion fat), but I realised he has a shiny skin and when I first went into his bedroom, I was afraid and searched and looked under the bed and all over, but he had only his rosary and I thanked God that he had given me a Christian husband.”

Mashonaland Central Provincial Affairs minister Martin Dinha took bootlicking to a higher level after he promised to sire a child and name her after the First Lady. He revealed that he had pictures of the First Family posted all over his matrimonial home in their honour.

“Ladies and gentlemen, I am not fit to untie her shoes or stand to introduce her,” Dinha said. He said the opportunity to introduce the First Lady came a few times in a lifetime.

“Like her, vilify her, but you can’t take the beauty of a fresh bouquet of roses,” Dinha said. “The post-independence history of Zimbabwe will never be complete without the mention of the First Lady.” Dinha made it clear that he had run out of superlatives to describe her.

U.K. tell its citizens not to visit Zimbabwe