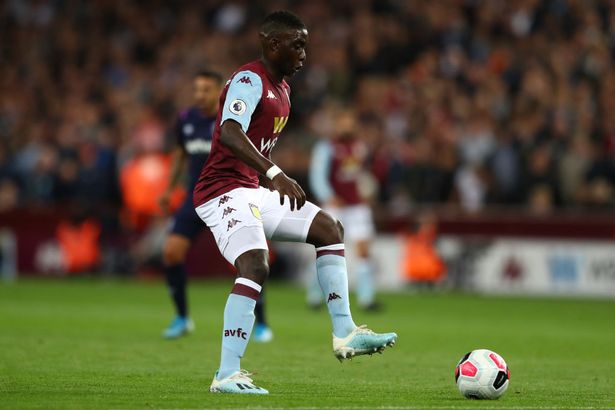 From not being able to afford football boots to gracing the Premier League – the story of Aston Villa’s smiling midfielder Marvelous Nakamba is truly humbling.

For the Zimbabwean owes everything to his hardworking mum, Charity, a maid who spent months at a time hundreds of miles away in South Africa to help support her family at their one-room rented home in Bulawayo.

“I was born in Hwange but grew up in Bulawayo,” Nakamba told BirminghamLive , “the second-largest city in Zimbabwe. Life was not so easy but, with football, it made me enjoy life. It helped me a lot.

“Football kept me out of other things, it was not an easy life. It made everything look easy because I was playing football.

“My mother was working in South Africa so she could support me, buying me football boots and everything, my first boots were Puma. She was there for me.

“She’d come back home every three or four months to visit for two, three weeks after being at work and did that again and again. She had to do that to provide for the family. I stayed with my dad, Anthony. It helped me focus more, to give everything to succeed in football for my family, for everyone around me. It helped me grow up. To be satisfied with what I have, to give hunger to what I want, giving everything for my family.

“My mother was a maid in South Africa. My younger brother, Junior, was so young, staying with my auntie in another city, Victoria Falls.”

The Villa star’s quirky first name was born thanks to parents Charity and Anthony who, Nakamba admitted, were so excited that they called him Marvelous because, well, it was marvelous news. “My name came from my parents,” he said. “My young brother is called Junior. My son will be called Junior Marvelous! But I think they were excited maybe, that’s why they gave the name Marvelous. We learn English at school, they understood what it meant.”

Back at Bodymoor Heath, though, and Nakamba had just finished training alongside his new teammates ahead of Sunday’s test at the Emirates against Arsenal. The softly-spoken 25-year-old kept reiterating the importance of “pushing and pushing” himself, a mantra he’s been doing ever since playing the beautiful game on the streets and sandy pitches back in Bulawayo, the birth place in fact of Coventry City legend Peter Ndlovu.

“In football, there are no limits, there’s no limit for room for improvement, it’s about giving everything,” explained Nakamba, knowing just how far he’s come in life. “I was doing what I loved, playing with friends. The pitches were difficult, playing in the streets. Before it was like playing in the sand.

“To help that dream, you said, ‘OK, if we can do it here, then there is possibilities to do it on good pitches’. Everyone is looking up to me. Every time I go home it’s like impossible is nothing, you just need to believe. You have the three Ds: discipline, dedication and determination. They are the keys.

“Everyone follows the Premier League. They were very happy for me coming to the best league. Peter Ndlovu is someone I know very well, someone I look up to and, every time I go home, I visit him.

“I was with him six months back in the off season. He’s a real role model. Also, I speak to Benjani who played for City and Portsmouth.

“[Ndlovu] was encouraging me to push hard in Belgium so I could go to a better league and he was preferring England, hoping and willing I could make it. He said he would like me to go to England, it would be best for career. I must continue to work hard.”

Nakamba, meanwhile, was thrust into the Premier League spotlight last week as Dean Smith handed him his big-league debut against West Ham United. The ex-Club Brugge man performed admirably early on before a lack of match fitness told late on.

Speaking about his start to life at Villa, Nakamba said: “So far so good. Everything has been fantastic. There’s always room for improvement. I’ll push and push myself and get better and better.

“My teammate’s did everything for me. Jacky [Grealish] was speaking to me in training and John [McGinn] as well before the game. The group is fantastic, we’re all there for each other.”

Finally, though, and for the record, Nakamba quickly dismissed wild reports circulating in the summer suggesting he’d gone on strike at Brugge in a bid to force a move to Villa, something that, quite frankly, did not happen.poll loading

“I don’t know how that come up,” he said, bemused. “I was not on strike. I had the African Cup of Nations and, after the match against Egypt, I had a small knock in training, that’s why I didn’t play the last two games against DR Congo or Uganda. After that I was resting. The club gave me permission to rest, it was an extended holiday.”

Nakamba is not the sort, either, far from it in fact. The star from Zimbabwe is as gentle and as warm-hearted as they come – a man who’s had it so tough but, now he’s at a Villa, he’ll be working harder than anybody to, as he puts it, “get better and better”.-Birminghamlive

Why this man could become Zimbabwe’s first Catholic saint