Why this man could become Zimbabwe’s first Catholic saint 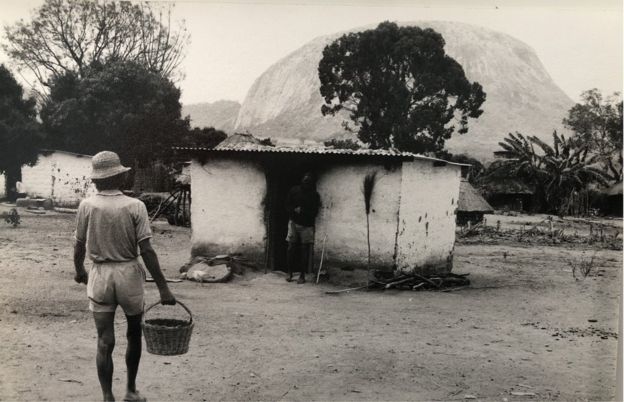 “You’re not safe here, John. You are going to be killed”. The bearded lay missionary with long, straggly hair stopped playing his flute for a moment and then shrugging off the thought, resumed.

A few days later, on 5 September 1979, John Bradburne would be dead. Abducted from his small hut in Mutemwa, north-east Zimbabwe, tortured and shot in the back – accused of being an informer.

The warning had been delivered by Catholic priest Fidelis Mukonori, his friend and driver, as they wound their way through the dusty roads to Mutemwa’s leper colony.

The war of independence was encroaching on the settlement. And the Rhodesian forces had withdrawn from the area.

“The [liberation war] guerrillas would never have killed him,” Father Mukonori tells the BBC. He believes it was the work of Rhodesian special forces, pretending to be guerrillas fighting the white-minority government.

Since his death, John Bradburne has become a revered figure in Zimbabwe’s Catholic community.

Thousands travel to Mutemwa on annual pilgrimages to pray, and there is a growing movement within the church in support of his beatification.

The five steps to sainthood

Read more: How does someone become a saint?

A wanderer and somewhat eccentric, John Bradburne had arrived in Rhodesia 17 years earlier at the age of 41, looking for a “cave to pray in”.

He came with three wishes for this life: to care for people with leprosy, to die a martyr and to be buried in the Franciscan habit.

The son of an English vicar, he had converted to Catholicism after serving in the British army in Malay and Burma, where he was injured in combat.

He joined the Mutemwa leper colony in 1969 as a warden, making his home in a pre-fabricated tin hut, with a grass matt for his bed and few possessions.

Working for the leper colony brought him validation he never received in his middle-class existence in the UK.

“He said to me: ‘From the day I set my eyes on these people, I discovered I am also a leper among my own people’,” Father Mukonori says.

He remembers Bradburne saying: “Working for and with them I feel appreciated, that I am doing something good and they call me Baba [Father] John.”

‘He had few possessions, only love’

Colleta Mafuta, 78, is one of the few surviving people with leprosy whom he cared for. Her hands were eaten away by the disease as a child and she came to Mutemwa for treatment.

“He arrived with few possessions, only love,” she recalls.

“The colony was filthy and the people were dirty. There was no medication, no clothes and people went hungry. He took care of everyone’s needs – feeding people, and washing and bandaging our sores.”

Every day for a decade, the routine was the same. Up at 03:00 to bathe the leprosy patients, feeding time at 07:00, he would help carry those to a church service and then a five km (three mile) run.

Bradburne was also a poet, who composed songs of worship and religious verse. In one he describes himself as the “Vagabond of God”.

With his trademark red headband, he was a striking figure who clashed with other leaders in the settlement.

His family attributes it to his efforts to prevent the exploitation of leprosy patients and his demand that patients be treated with dignity.

Since his death, several people have claimed miraculous healings after praying to him.

This satisfies one condition for sainthood in the Catholic Church. It is also said that at his funeral, held in Harare, a speck of unexplained blood appeared below his coffin.

However, it took years for the Vatican to agree to his family’s request to consider him for sainthood.

His niece Kate Macpherson took over the push for beatification from her late mother, Celia Brigstocke. Mrs Brigstocke had formed the John Bradburne Memorial Trust in 1995, as a charity and as a vehicle to push for his sainthood.

“She came here many times and saw the miracles, and saw the people and the love,” Mrs Macpherson says.

“It was actually people who were getting in contact with her – religious people, lay people – just saying there is something more to this. Every year momentum gathered, and testimonies were coming in hundreds of thousands.

“It’s not everyone who can say: ‘My great-uncle could be a saint’,” she laughs, “this is a unique and surreal thing.”

This year the Vatican approved what is called “the opening of the cause” to canonise Bradburne.

The formal process involves presenting arguments for and against a candidate being made a saint.

Thousands of curious church members flocked to the mass, held on 5 September to coincide with commemorations of the anniversary of his death.

There were no opposers to the cause.

It means that the local church will now establish a team to investigate the testimonies, then compile a report to be sent to Rome’s Congregation of Saints.

If another miracle is recorded in his name then he is likely to be declared a saint.

Only one other Briton has been canonised in the last 40 years. A Victorian cardinal called John Henry Newman, who died over 120 years ago, will be beatified later this year.

Bradburne’s supporters believe the momentum is there for him to be beatified. Their only hope is that it will be achieved in their lifetime.

A ceremony marking the 40th anniversary of John Bradburne’s death is to be held at Westminster Cathedral in London, UK, on Saturday 21 September.-bbc