Man kills baby on Facebook Live then takes own life 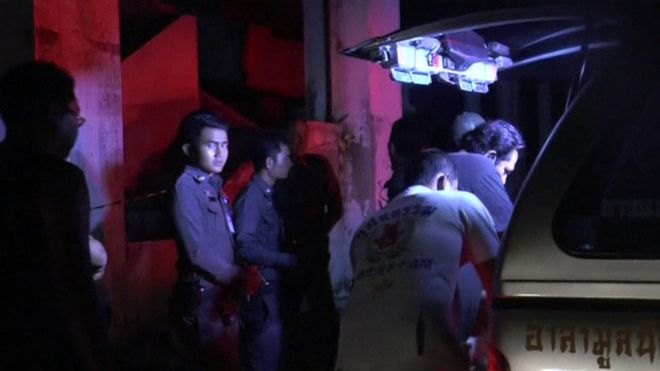 A Thai man filmed himself killing his baby daughter on Facebook Live, before taking his own life, Thai police say. The 21-year-old hanged his daughter, and then himself, at a deserted hotel in Phuket on Monday, reportedly after an argument with his wife.

Facebook sent condolences to the family for the “appalling” incident and said that the content had now been removed.

The company pledged a review of its processes after footage of a US killing stayed online for hours this month.

The footage of the Thai killing had also been available on video sharing website YouTube, but the company took it down after the BBC alerted it to its presence.

Relatives of the Thai man, Wuttisan Wongtalay, saw the distressing footage and alerted the police – but the authorities arrived too late to save him and his daughter.

In a statement, a Facebook spokesperson said: “This is an appalling incident and our hearts go out to the family of the victim. There is absolutely no place for content of this kind on Facebook and it has now been removed.”

Thailand’s ministry of digital economy said it had contacted Facebook on Tuesday afternoon about removing the videos.

Ministry spokesman Somsak Khaosuwan told Reuters: “We will not be able to press charges against Facebook, because Facebook is the service provider and they acted according to their protocol when we sent our request. They co-operated very well.”

YouTube said it had taken down the video within 15 minutes of being told of its presence by the BBC.

Its statement read: “YouTube has clear policies that outline what’s acceptable to post and we quickly remove videos that break our rules when they’re flagged.”

Shortly before the BBC alerted YouTube, the video was showing 2,351 views.

Thai social media users reacted with anger to the footage, while offering condolences to the family of the girl, BBC Thai editor Nopporn Wong-Anan says.

Devastated relatives of the child, including the mother, picked up the body of the girl and her father from hospital on Tuesday.

Following the US killing, Facebook said it was “constantly exploring ways that new technologies can help us make sure Facebook is a safe environment”.

“We prioritise reports with serious safety implications for our community, and are working on making that review process go even faster,” blogged one of its executives last week.

This latest atrocity comes less than a fortnight after a US man bragged on Facebook Live about his murder of a 74-year-old man in Cleveland, having also posted a video of the killing to the social network.

The platform’s chief, Mark Zuckerberg, subsequently acknowledged he had “a lot of work” to do after it emerged the murder clip had remained online for more than two hours despite Facebook having received complaints in the meantime.

Prior to that, Facebook Live broadcast the death of a Chicago man who was shot in the neck and head last June, and then in July a woman streamed the death of her boyfriend after he was shot by police in Minneapolis.

There have also been reports of sexual assaults, animal abuse and teenage suicide having been shown.

For its part, Facebook is trying to find ways for its review team – which employs thousands of people – to react to such content more quickly.

In addition, the firm has developed software to prevent such footage being reshared in full on its service at a later point.

And it is also exploring the use of artificial intelligence to automatically flag videos and photos that need to be reviewed rather than waiting for other users to report them.

What it hasn’t discussed is the idea of scrapping Facebook Live altogether.

With Twitter and YouTube, among others, offering rival live-streaming products, doing so could put it at a disadvantage.

But as a result, there will inevitably be further outrages and criticism because Facebook Live’s popularity makes it all but impossible for the firm to keep a human eye over each broadcast. BBC News