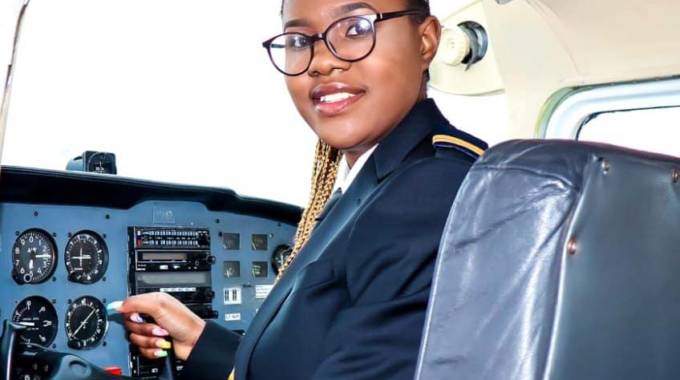 Captain Swoswe did her primary and secondary education in Rusape before undergoing a flight training services course in South Africa from 2019 to 2021.

She graduated as a private pilot in South Africa on June 9.

She holds a Diploma in Business Management and Development from the Gordon Institute of Business Science at the University of Pretoria in 2019.

In an interview with The Manica Post from her South Africa base early this week, Captain Swoswe said there were no limits for women in the male-dominated aviation industry.

Her first flight was with instructor Matthew Reynolds who was impressed by how she handled the plane with precision.

“My first experience gave me great contentment. I felt that I had broken down many barriers. Women should also leave a mark in these male dominated industries.

“I have managed to prove that young rural girls raised by single mothers can succeed in life. The desire to raise the Manicaland flag also inspired me.

“When Cyclone Idai hit some parts of Manicaland in 2019, that also inspired me to take up the course so that I can actively participate in future rescue missions and save lives,” she said.

“I have a role to play in the development of my country. I have humanitarian work at heart and want to fly to save lives and later start my own development organisation such that when natural disasters strike again, I will fly to bring disaster relief and save lives in my country of birth,” said Captain Swoswe.

She said Zimbabwe has some of the best brains in the world, adding that opportunities need to be availed to these people for the benefit of the country.

“My qualification should be an inspiration to many young girls. The rural girl child out there should be motivated to see that there are many career opportunities at their disposal.

“They need to go beyond the norm, rural young girls are not destined to become housewives.

“I know that school fees can be a huge challenge, but if families work in improving their agricultural production like what mine did, school fees can be raised. I want those young girls to get up and do it no matter the circumstances.

“Rural Zimbabwe is where I came from. I hit an iceberg once, but I got up and ran,” said Captain Swoswe.

She said her mother, Ms Gladys Swoswe, as well as the late Air Force of Zimbabwe Flight Lieutenant Annita Mapiye who perished in a helicopter crush in Harare together with Wing Commander Thomas Tinashe Manyowa and aircraft technician, Flight Sergeant Tinodiwanashe Chikamhi, are among her role models.

“Being the first female combat helicopter pilot, the late Flight Lieutenant Mapiye’s story and achievements taught me that anything is possible as long as you put your mind to it,” she said.

Ms Swoswe said she is proud of her daughter’s academic discipline.

“Her academic discipline and achievements from primary school up to now make me so proud. Her hard work and kindness to the entire family, her friends and peers is out of this world. Tiffany has a big heart. On top of that she is a well-mannered young lady.

“On her journey to success, she has been through a lot. School fees was not always readily available, but she would not sit back and do nothing about it. She joined me at a tender age to run the family business and bring in extra income to fund her studies.

“Tiffany says there is a perception within the aviation industry that girls are not good enough. The industry is not friendly to black female pilots, but she overcame these obstacles by remembering her roots and being resilient.

“It is not about where she came from, but about how good she is at what she does,” said the proud mother.

GMB to receive maize from vaccinated farmers only