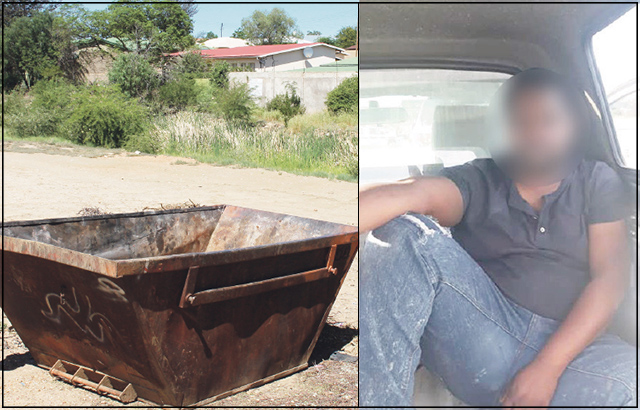 THE police yesterday arrested three Zimbabwean suspects in connection with the murder and burning of a 10-year-old girl in Windhoek over the weekend.

Police deputy commissioner Kauna Shikwambi in a statement issued yesterday said two of the suspects are a couple, while the third suspect is believed to be the girl’s mother.

The body of the girl was discovered between late Friday evening and early Saturday morning, burned beyond recognition in a garbage skip in Windhoek North.

Shikwambi said the couple were initially on the run but were arrested yesterday close to Otjiwarongo.

Kauna said there is video footage showing the suspects dragging a wheelie bin with the body of a de-ceased at 21h00 on Friday.

Residents of Windhoek North yesterday told The Namibian they woke up to a pungent smell on Saturday that they later discovered was from the burnt body of a young girl dumped in a rubbish skip. The girl’s body, discovered in Oievaarstraat, was burnt beyond recognition.

Police deputy commissioner Kauna Shikwambi in a statement issued on Saturday said a retired teacher, who was allegedly walking to a nearby shop and discovered the body of the girl, believed to be between seven and 10 years of age. She said no one had come to claim the minor’s body at the police mortuary.

The deputy commissioner said a case of murder and obstructing/defeating the course of justice has been opened.

When The Namibian visited the scene yesterday afternoon, some residents peeked from their windows, watching every movement around the skip.

A resident, who declined to provide his name, but who lives next to the rubbish skip, said he arrived home at around 20h00Advertisementon Friday evening and noticed two people carrying what he thought was rubbish to the skip. He said he assumed they were residents from the neighbourhood but could not make out their faces.

Later in the evening, he smelt something burning, which he assumed were plastic bags burning in his house. However, after searching around, he realised the smell was not coming from his house and suspected it was coming from the rubbish skip and he closed his windows.

At around 11h00 the following morning, the resident said he saw people milling around the rubbish skip. After enquiring about the commotion, he learned that a body of a child had been burnt and dumped in the bin.

He said the incident has raised alarm in the neighbourhood and urged the City of Windhoek to put up surveillance cameras at all rubbish points, as there have been similar incidents reported around the city in the past.

He made reference to Lukas Nicodemus case, who was arrested in January 2016 and charged with killing two women and burning their bodies at a dumpsite at Pionierspark in Windhoek.

Another resident from the area yesterday also said they woke up to the foul smell but thought it was coming from the Windhoek Central Hospital, since it is nearby.

“I know when human flesh is burning,” said the resident.

The residents say they suspect that the child is not from the area, as they believe parents or guardians would have reported a missing child after hearing of the incident.