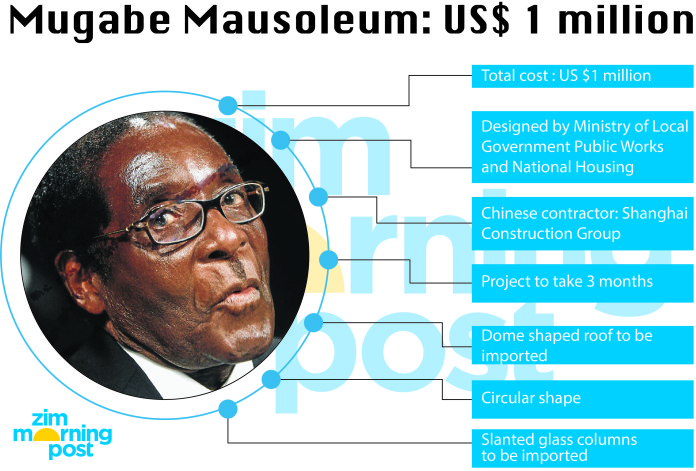 FRESH details have emerged concerning the state-of-the-art mausoleum where the remains of the former President Robert Mugabe, who died on September 6, 2019, will be interred.

Zim Morning Post revealed that the construction plan was approved on Monday and work has begun at the Heroes Acre.

Investigations by this publication also reveal that the contract to construct the mausoleum was awarded to a Chinese company, Shanghai Construction Group, which is currently building the new Parliament of Zimbabwe.

“The mausoleum will cost USD 1 million and it will take the contractor three months to complete the structure,” the source said.

“The design was done by the ministry of Local government, Public Works and National Housing architects,” said the source.

“The mausoleum plan has been approved, and I can tell you that this is a state-of-the-art building. It is expected to take longer than the authorities want.

The source, who spoke on condition of anonymity, gave a vivid description of the mausoleum, depicting it as circular in shape with a solid-dome-roof.

“It is circular in shape and has a solid-dome-roof as well as slanted glass columns, with the grave on the centre,” the source said.

Shanghai Group Project manager Cai Li Bo confirmed that his company has been handpicked to build the mausoleum.

“It is true that we are building the mausoleum and the time for its completion depends on the availability of the material,” Cai Li Bo said.

Investigations also revealed that the slanted glass columns and the solid-dome-shaped roof will be imported from abroad.

As was first reported by this publicationMugabe’s burial place was confirmed to be the National Heroes acre amid reports that his family wanted a mausoleum erected a distance away from the grave of his first wife Sally Mugabe.-zimmorningpost