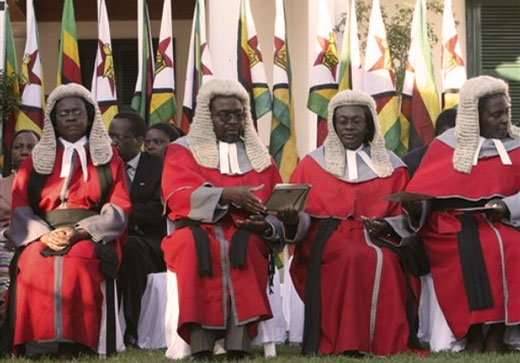 SPREADING fake news on social media and mainstream media about coronavirus (Covid-19) has been categorised as a Level 14 offence, the highest in the country and people liable will be jailed for 20 years, officials have confirmed.

In Zimbabwe most of the fake news is spread through WhatsApp, Twitter and Facebook social media platforms.

Justice, Legal and Parliamentary Affairs Minister Ziyambi Ziyambi told Sunday News yesterday that the measure to categorise spreading of fake news about the pandemic as a Level 14 offence was part of Government’s efforts to ensure that the country effectively contains the spread of Covid-19.

“This is part of a Statutory Instrument (SI) under the Public Health Act, which now criminalises the peddling of falsehoods relating to this pandemic.

“The reason we had to come up with that SI was after we noted the proliferation of fake news, which were hindering the fight against the spread of the pandemic.

“We are using the Public Health Act which according to Section 68, empowers the Minister of Health and Child Care to make such regulations in times of emergencies, to help contain such viruses,” said Minister Ziyambi.

He said it was vital for people to realise the effect of spreading falsehoods on the functions of society as it had the danger of causing unnecessary panic and even affect Government efforts to contain emergencies.

“No society can function when lies are peddled willy-nilly, these could have a far reaching ripple effect that could even affect the nation more than the effects of the pandemic alone, hence the reason Government has decided to criminalise this practice especially on various social media platforms,” said Minister Ziyambi.

Local Government and Public Works Minister July Moyo who is a member of the Inter-Ministerial Taskforce on Covid-19 reiterated this when he said journalists also risk being jailed for writing falsehoods around the pandemic.

Minister Moyo heads the sub-committee on resource mobilisation and co-ordination.

“However, they must be responsible, falsehoods will exacerbate panic of which we are already scared of this pandemic and trying to understand it. In terms of jail term, one can spend up to 20 years behind bars, in terms of fines, it is the highest possible fine which we haven’t even as yet set a figure,” he said.

The minister said they were also monitoring people who forwarded false messages they received on their mobile phones as they were equally liable even if they had not originated the messages. According to Statutory Instrument 83 of the 2020 Public Health, Covid-19 Prevention, Containment, Treatment and Lockdown Order; “For the avoidance of doubt any person who publishes or communicates false news about any public officer involved with enforcing or implementing the national lockdown in his or her capacity as such, or about any private individual that has the effect of prejudicing the State’s enforcement of the national lockdown, shall be liable for prosecution under Section 31 of the Criminal Law Code and liable to the penalty there provided, that is to say a fine up to or exceeding level 14 or imprisonment for a period not exceeding 20 years or both”.

A number of countries in the region have also promulgated laws to curb the spread of falsehoods on social media, with authorities concurring with the Zimbabwean Government that such acts hampered efforts being made to contain the pandemic.

In South Africa the government gazetted a new law under their Disaster Management Act where citizens could receive a fine or a six-month prison term for spreading fake news about the coronavirus.

The Act classifies fake news as “publishing any statement through any medium, including social media, with the intention to deceive any other person about measures by the government to address Covid-19.”

Meanwhile, the Association of Apostolic Churches in Zimbabwe (AACZ) has called on members of the public to refrain from relying on unofficial social media platforms for information related to the coronavirus.

AACZ president Archbishop Tsungai Vushe said people should rely on the mainstream media for relevant information and avoid being misled by some media platforms, which have become havens of peddling falsehoods.

“People should ignore rumours and fake news being disseminated on various media platforms about the coronavirus but rather they should stay informed through news or information from mainstream media such as newspapers, radio and television.

“We should also support our Government’s various initiatives and programmes in its bid to curb the spread of this deadly disease while we also co-operate with the Ministry of Health and Child Care,” he said.

Archbishop Vushe also applauded the Government for the 21-day national lockdown to contain the spread of the Covid-19.

“On behalf of my association, AACZ, we are very happy with President Emmerson Mnangagwa’s decision to declare a 21-day national lockdown. As Christians we are praying indoors and we are always geared to pray for our national and the well-being of the people.

Furthermore, I’m urging all Zimbabweans not to panic as God is in control. Coronavirus is real and it’s there so let’s take this pandemic seriously. As Christians, we must be exemplary and good listeners remembering that God helps those who also help themselves,” he said.
AACZ is a grouping of Apostolic and Zion sects with a membership of over 400 denominations.