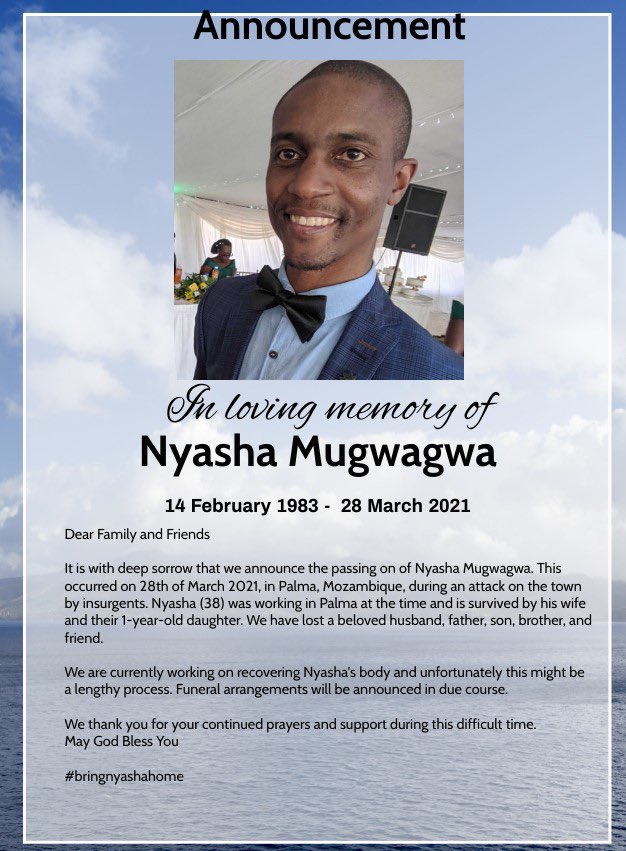 Nyasha Mugwagwa, 38, a Zimbabwean man who died during terror attacks in Palma, Mozambique, is one of the 12 people who were beheaded, the Zimbabwean government says.

Initially the Mozambican army said they would send a team to identify the bodies of the 12 victims who were all foreigners.

The bodies were found near the Amarula Hotel where many expatriates took refuge for days during the attacks and tried to escape in a convoy of cars which ran into an ambush on March 26.

TimesLIVE reported on Monday that Mugwagwa, who worked for hotel and catering company Remote Site Solutions, which was contracted at the multibillion-dollar gas projects being built by France’s Total in Palma, died four days after he went missing.

In a statement, Zimbabwe’s foreign affairs ministry said all Zimbabweans that were feared missing have been accounted for. However, Mugwagwa, whose family confirmed he had died, according to government’s investigations is one of the 12 people who were beheaded.

“Emerging eyewitness accounts are confirming that Mr Nyasha Mugwagwa, a Zimbabwean who worked for the Remote Sites Solutions (RSS) company in Palma, was among the 12 that were killed in Palma by insurgents,” the government said.

His family earlier said they were engaging authorities to retrieve his body and accord him a decent burial. However, that might be next to impossible because he was buried with the other 11 in a mass grave when their bodies were in a state of decomposition.

“Under such conditions, pathological expertise is required to identify the bodies,” the government said.

As such, the Zimbabwean government has engaged Mozambique “with a view to identify bodies.” Once Mugwagwa’s remains were found, there would be a repatriation process.