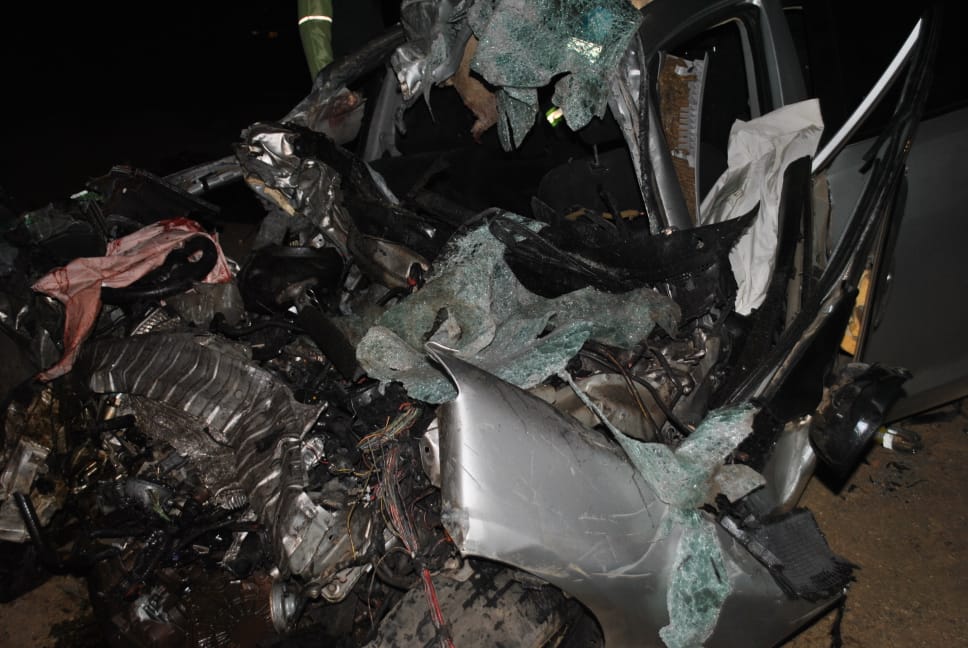 HARARE – A Central Intelligence Organisation (CIO) agent and a female passenger died half-naked in a car after a horrific road accident which also claimed the life of a police detective near Marondera, police said.

A Mazda 3 driven by Detective Sergeant Benson Chingawo of Juru Police Base collided with a truck near Watershed in Marondera just after midnight on Monday, on the highway linking Harare and Mutare.

Chingawo died on the spot together with CIO agent Batsirai Maposa and a woman identified as Franny Onai Zinyuku. Maposa and Zinyuku were passengers in the back seat.

“The victims are a male individual from the President’s Office, another a male police officer and a female civilian. The accident involved a Mazda 3 and a truck whose driver survived with some injuries.”

Mangled metal … The Mazda 3 suffered extensive damage in midnight crash near Marondera
Pictures from the accident scene showed Maposa without his trousers on and Zinyuku’s dress raised above her waist. She appeared to have been lying across the seat at the time of impact, while Maposa was in a sitting position.

Assistant Commissioner Nyathi condemned the people who took the pictures.

“About the two half-naked people at the back seat, we’re still investigating the circumstances and we urge people who rush to accident scenes to avoid taking pictures,” Nyathi said.

“People who arrive first at accident scenes should try to offer help, instead of rushing to take pictures for social media glory.”

Nyathi said they had recovered money from Zinyuku’s belongings, but he would not disclose the amount. A police source said the cash was in excess of US$3,000.