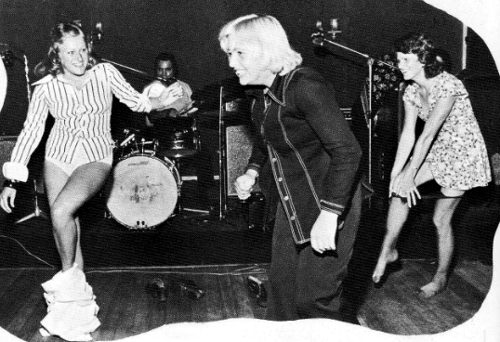 ALL OVER Southern Africa MEN-ONLY bars and clubs are common place. But at two of Salisbury’s best-known night clubs —Le Matelot and Brett’s—it’s LADIES ONLY one night a week.

The only men allowed are the entertainers and waiters.

Women of 18 upwards from every walk of life—secretaries, students, nurses and so on—come along for a drink and chatter, let their hair down, dance with each other and have an enjoyable night out.

Women attracted to the Ladies Only are visitors to Salisbury, girls without boy-friends who want an evening out, housewives getting away from household chores, daughters, mums and grans bridging the generation gap, and wives and girl-friends fed up with sitting alone while the men are out drinking with the boys.

Above: A stripping competition gives the girls a chance to rival the professionals. It is all good fun and It doesn’t go too far.
Brett’s Ladies Only is every Tuesday and Le Matelot’s every Wednesday. So the girls can go wild and have a Ladies Only twice a week if they wish.

Both night clubs charge an entrance fee of 25 cents—within every working girl’s pocket. This gives them a band, a cabaret and compere, dancing and competitions. Drinks and snacks are extra.

The ladies start arriving at 5 p.m. and usually come straight from work. They unwind, have a few drinks and talk with the other girls and dance to the band until the cabaret starts at 6.30 p.m. When the cabaret is over, there’s usually a competition—and that’s when the fun really begins. The girls round off the evening with more dancing.

If the feeling takes you, and the dance floor is crowded, then no one objects to dancing on the table. Relaxing the rules encourages a happy atmosphere at Ladies Only nights.

Brett’s Ladies Only night finishes at 8 p.m., Le Matelot’s goes on for another half-hour, but they need not go home. The rest of the evening is mixed, some of the ladies being joined by their husbands or boy-friends, all inquisitive to know what they’ve missed.

I had permission from the owner of Brett’s, Mr. Appie Olivier, to come with a male photographer. He wanted me to dress the photographer as a woman, for his own safety. Previously an entertainer, Alan de Wolfe, had been stripped of everything but his underpants. But the photographer wasn’t coming in “drag” for anyone. When we arrived, the girls were quite well disposed to having a photographer taking flashes in their domain, and soon forgot he was there.

The photographer was surprised to find the girls had even taken over the gents’ toilets but that’s Ladies Night for you. As far as they were concerned, he was the intruder.

Above: A crowded evening at Le Matelot, with the ladies clapping along with the entertainers. Tho support these evenings — unique anywhere — receive, comes from both Salisbury girls and visitors to tho city.

The cabaret on the night we went consisted of Los 3 de America, a superb group from Madrid who sang Paraguayan style, Rosita, a Spanish belly dancer who tried to teach some of the girls how to gyrate, and Carlos Quintas, a Portuguese band.

The girls had already begun to sway with the rhythm. They were clapping, stamping and even dancing on the tables. The atmosphere was becoming hazy.

But the high point of the evening was competition time. In the past, Brett’s have had a variety of competitions, ranging from can-can, twist, go-go dancing, hamburger- eating and drinking a bottle of beer. They’ve even had the girls dipping their heads with their hands behind their backs, into filled bathtubs with apples in them.

Usually the prize is a bottle of champagne, but the winner of the go-go competition received two return tickets to the Victoria Falls. In another competition the winner received a generous gift voucher from a Salisbury boutique.

The night we were present there was a stripping competition. Daredevil, the winner, ended up in the middle of the cabaret floor with a pair of briefs on and a bra partially off. But it was all good fun. The waiters were shooed out of the room before the competition started by Mr. Olivier, and the winner was egged on by the female audience shouting “take it off”.

Cabaret at the Ladies Only evenings is provided by top entertainers, and at the nominal entrance charge of 25c, the ladies receive wonderful value for money.

When the competition was over it was back to dancing and letting rip on the cabaret floor.

In the past, Brett’s and Le Matelot have had female strippers in the cabaret on Ladies Only nights, but they don’t go down at all well. Why do they want to see a member of their own sex strip! Now if it were a man! “These girls know what they want”, said Mr. Olivier and he is shrewd enough to know how to please the customers.

The next night, the photographer and I went along to Le Matelot, where Ladies’ Only nights originated. Mr. Hollingshead, the general manager, thought up the idea while talking to friends about a bachelor party he had attended. That was 18 months ago.

The audience at Le Matelot are, on the whole, more mature than at Brett’s. Brett’s specialise more in a Continental cabaret and Le Matelot in British entertainers.

The evening we were at Le Matelot, Diane O’Connor, a comedienne, singer from Ireland, and Dave Berry, well-known British pop singer, were the cabaret, supported by a band called “Spell” from Cape Town.

Things really got warmed up when Dave Berry came on. When he partly removed his shirt and showed his bare chest, the girls were standing on the tables and screaming for more.

Le Matelot have their share of wild evenings. In fact, the manager believes that Ladies Only nights have saved a lot of marriages, as this is one way the girls can really give vent to their emotions, which they can’t do at home.

Above: From junior typist to fun-loving grans, they all enjoy an opportunity to let their hair down away from disapproving male eyes.

On one occasion, the girls at Le Matelot de-frocked or rather de-kilted, a Scottish entertainer, Kerry McNeillie, who fled backstage clutching his underpants and saved his masculinity. Well, the girls were only trying to find out once and for all if Scotsmen wear anything under their five metres of tartan plaid.

Above:: Here’s something to surprise the husband with when he gets home — two adventurous types receive a lesson in belly-dancing from an expert, who also appears in the cabaret

Le Matelot do have joke competitions, although they did not have one the evening we were there. The prize is always a bottle of champagne.

Ladies Only nights arc proving so popular in Salisbury that they could spread to other pans of the country.

Source: Rhodesia Calls Magazine dated MARCH—APRIL 1974 which was made available by Denise Taylor.
Extracted Recompiled and Eddy Norris for sole use on ORAFs blogs.