A Dumbarton lollipop man has been banned by the local council from “high-fiving” children as they cross the road.

Nkosana Mdikane, 74, is known as “Scotland’s happiest lollipop man” due to his singing and dancing at work.West Dunbartonshire Council said safety fears were behind the decision.

But school parents have questioned the council’s reasoning, with one father David Dufton starting a Facebook campaign to try to reverse the move.

A statement from West Dunbartonshire Council said: “All patrollers are instructed when crossing children over a road to remain static with one hand on their stick and the other stretched outwards. This ensures that they can be seen and effectively provides a barrier between school pupils and the traffic.”

On its Facebook page the council added: “This is national guidance and has been the case for a number of years.” 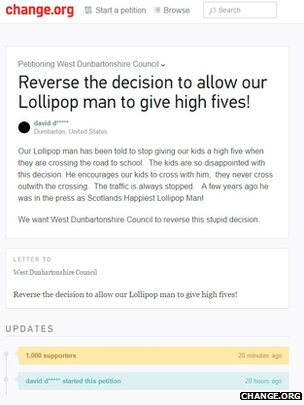 But Mr Dufton said he thinks the council’s logic is “flawed”.

Speaking to the BBC Scotland news website, he said: “Because our children want to go and see him [Nkosana Mdikane] they all cross at the pedestrian crossing, rather than anywhere else on the road, so he’s keeping our children safe.

“Also because he’s such a ‘larger than life’ character the cars pay more attention too.”

Mr Dufton said he had been bowled over by the reaction to the Facebook group named “Save the high fives”, which has gained support from almost 3,000 people since it was set up on Wednesday afternoon.

A petition “Reverse the decision to allow our Lollipop man to give high fives!”, also set up by Mr Dufton, has so far been signed by more than 1,000 people.

Mr Mdikane began working as a lollipop man in September 2013, having moved to Scotland from South Africa in 2003. 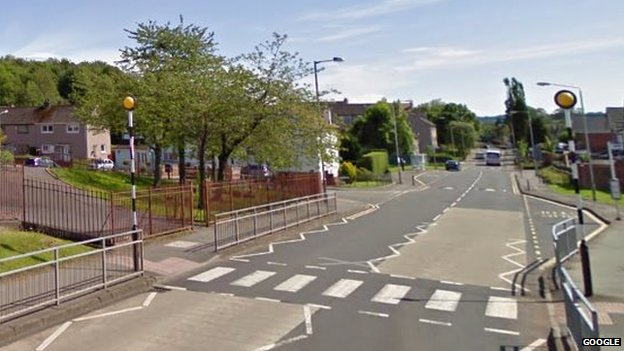 Soon after beginning work at Aitkenbar Primary School and St Peter’s Primary School in Dumbarton he became a local celebrity, with some drivers even admitting to taking detours past the schools in order to watch Mr Mdikane’s dance routines.

Mr Dufton said Mr Mdikane had been “quite down about the whole thing” but said he hoped Mr Mdikane would see from the Facebook campaign and petition that parents were “right behind him”.BBC