Zimbabwe based businessman leaves £40 million mansion near Kent to rot 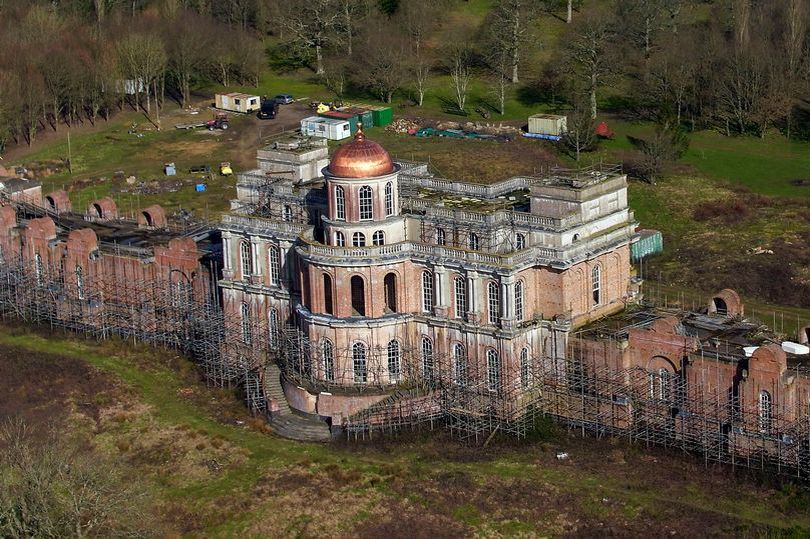 You may come across an incredible half-built mansion when driving over the East Sussex border.

The building is in fact bigger than Buckingham Palace, and it’s got an intriguing past.

It’s not only unfinished, but it’s also mostly abandoned and possibly haunted.

It was once said to be the most expensive private house built in Britain for a century and it is bigger than Buckingham Palace.

It was even dubbed “The Ghost House of Sussex”, our sister site SussexLive reports.

Still haven’t heard of it?

Construction on the £40 million Hamilton Palace started 36 years ago and has never been completed, with the grand building abandoned (Image: Lisa Powell)
Let us introduce you to Hamilton Place, the jaw-dropping, £40 million mansion which started to come to life in 1985.

Designed for British multi-millionaire Nicholas van Hoogstraten, one of the wealthiest people in Sussex, Hamilton Place is something else.

It’s been the subject of immense investment despite the fact that no one has ever lived in it and there is little sign that anyone ever will.

But despite its scale, there is little to hint at its presence as you approach. It is hidden away off of an unassuming junction on the A22 south of Uckfield in East Sussex and the house, bigger than Buckingham Palace, is completely obscured by a thick wooded area.

Trying to find a way of seeing the giant Palace is proving difficult the only way from the road is through some iron gates on High Cross. (Image: Martin Burton/SussexLive)
The closest glimpse you can get on foot is of a gated entrance onto the estate that gives nothing away, aside from a bricked unit and a large, white container.

But there is a definite sense of unease. Stuck on the gate is a sign ‘High Cross Estate, Private Property, Keep Out’ written in capital letters.

If that’s not enough, multiple other signs warn of “shooting in progress”, “dogs running free” and CCTV being in operation. It is a clear message: do not try and come in.

The second building on the estate, reportedly a mausoleum (Image: Steve Parsons/PA Wire)
Those photos show an an eerie building, shrouded in scaffolding and overgrowing foliage, with discarded containers, construction equipment and other items littered throughout the grounds. It doesn’t look like anything has happened here for a long time.

Few have been inside, but one reporter who did, in 2000, when it was said to be two years off completion, described a grand central staircase and reception hall, with lift shafts already installed and expensive stone balustrades and pillars.

Low-level lighting had been installed on the roof, where there was to be a garden, and there was space for a fountain below. One entire floor was due to house van Hoogstraten’s art collection.

Today, the domed roof of the main building still rises over the top of the treeline and remains visible from a distance from the nearest set of houses in the hamlet of Palehouse Common.

Van Hoogstraten, a convicted criminal who is now 76 and goes by the name of Nicholas von Hessen, is a Sussex native born in Shoreham who owns dozens of properties in the area.

He is said to have started making money selling stamps as a teenager before moving into property and, by the age of 22, had 350 properties in Sussex alone.

Over the past couple of decades, he has been involved in widely reported disputes with neighbours over the huge estate.

Locals have previously vented about the large area being left unused and there was a row over a public footpath that ran through it that van Hoogstraten did not want to be used.

In answer to those complaints, he is quoted as saying “even the most moronic of peasants would be able to see… that we have been busy landscaping the grounds of the palace so as to prepare for scheduled works”.

And he has also denied that the house is falling apart, saying: “Hamilton Palace is far from ‘crumbling’ and was built to last for at least 2,000 years.

“The scaffolding only remains as a part of ongoing routine maintenance such a property would require until completion.”

It is thought the estate is now owned by his children through the company Messina Investments.-Kentlive