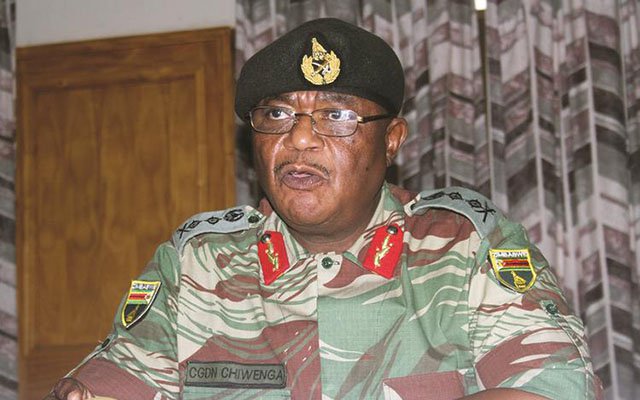 The architect of the military coup in Zimbabwe General Constantine Chiwenga nearly died in 1982 when he shot himself in attempted suicide after being caught cheating in a military examination.

Mr Freeth, who lives in Sittingbourne, revealed that his former pupil could have been thrown out of the Zimbabwean army on a charge of cheating but for him. The retired Army officer was part of the British Military Advisory and Training Team (BMATT) that oversaw the integration of guerrilla fighters and Rhodesian soldiers into one unified army after independence in 1980.

Mr Freeth was among the first batch of instructors to teach senior officers, including the then Brigadier Chiwenga, in 1982.

He told the Sunday Times: “I knew him very well. I probably did too good a job!”

But during one assignment he says the young Chiwenga, then in his 20s, handed in an essay which, apart from one sentence, was a word-for-word copy of a model essay given to students.

He told the Sunday Times he tackled his student, who claimed it was “coincidence.”

Mr Freeth said: “He knew he was in trouble. The commander of the Zimbabwean army had warned that anyone caught cheating would be thrown out and he’d been caught red-handed.”

The next morning, while Freeth was deciding what to do, a clerk ran in to say Chiwenga had shot himself in the chest and was in intensive care.

Freeth recalled: “He had shot himself not once but twice but, amazingly, missed the heart and lungs.”

“I knew him very well. I probably did too good a job!” – Zach Freeth

Chiwenga survived and when he returned to the college, Freeth said nothing.

Freeth said: “After that, the whole thing was forgotten. But he knew perfectly well I hadn’t shopped him and could have done.”

In 2003 Chiwenga became defence chief and invited Freeth to his office.

Mr Freeth said: “He gave me his card and said, ‘If you ever need anything . . .’ We both knew what he was referring to.”

He added: “To this day, if you ask Chiwenga to remove his shirt you will see two puncture holes in his chest.”

Mr Freeth’s son Ben, who married a Zimbabwean and moved to the country, had his farm seized and was badly beaten by Mugabe thugs.

He went on to write a book about living under Mugabe’s rule called Mugabe and the White African.