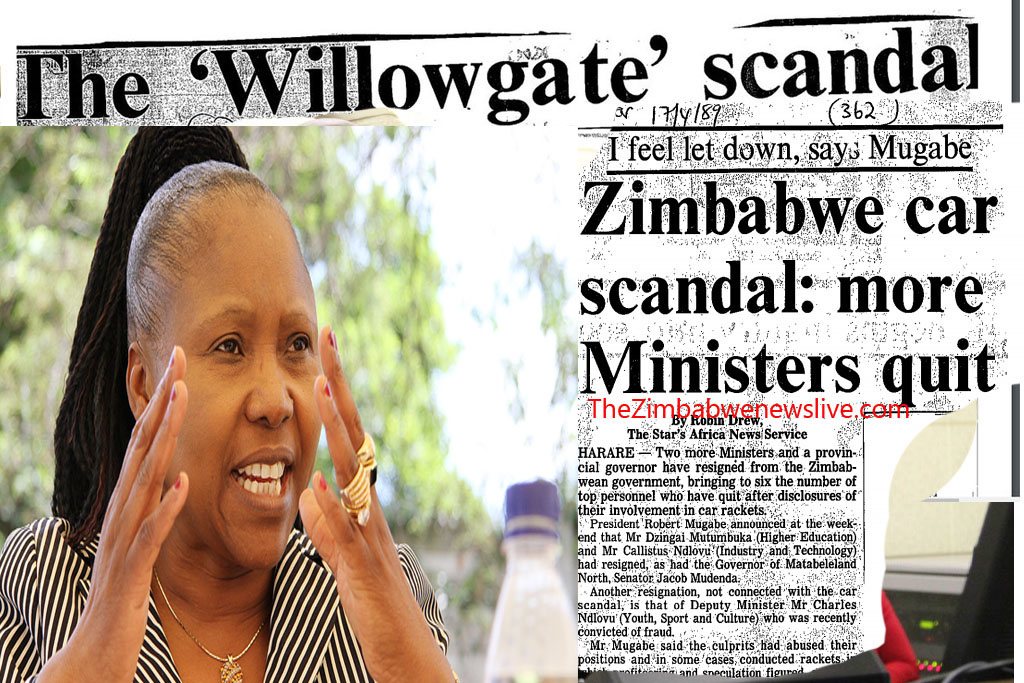 The Sandura commission’s first inquiry rocked the government at the time. The Zimbabwenewslive.com will in the next few weeks make available the details of the report. Our last reported focused on current Speaker of Parliament Jacob Mudenda. This week we look at Oppah Muchinguri Kashiri (born Oppah Chamu Zvipange Muchinguri who is the current Minister of Defence in the Cabinet of Zimbabwe. She has also served as Minister of Higher Education and Minister of Women’s Affairs.

The allegation against  this Deputy Minister was that in May 1988 she purchased  a motor vehicle  from Willowvale and resold it shortly thereafter at a price exceeding the controlled price. The moto vehicle in question was a Toyota Cressida Sedan, Registration No.477-519H, 1988 model.

The commission heard evidence from the following witnesses:

In addition, the Commission received an affidavit from A.Mawere who is presently working in the United States of America.

Muchinguri’s evidence is as follows:-

When she became a Member of Parliament in October 1987 she did not own a motor vehicle. She approached the speaker of the House of Assembly, informed him that she wanted to purchase a motor vehicle and sought his assistance .He referred her to the Secretary for Industry and Technology. She saw him and sometime in December, 1987, she was informed by the Ministry of Industry and Technology that her name had been placed on a list of persons to be allocated new vehicles. In January, 1988 she was appointed a deputy Minister and a C.M.E.D motor vehicle was allocated to her for her use. The need to purchase a motor vehicle, therefore, fell away. However, in May, 1988, she was informed that a new Toyota Cressida motor vehicle had been allocated to her and was ready for collection from Willowvale.

In his Affidavit Mawere admits purchasing the motor vehicle from Willowvale but states that shortly thereafter he had to leave for the United States. Before leaving he took the motor vehicle to a company called Executive Cars and sold to that company for about $30 000. He himself had paid $29 908, 80 for it.After the sale, he left the country.

In their evidence, Long and Davies said that they acted as agents for Executive cars and sold the motor vehicle to African Distillers for $95 000. The proprietors of Executive Cars are out of the country at the moment and the commission has not, therefore, been able to question them. In addition, Mawere is in the United States.

Muchinguri has since then been involved in other scandals involving farms and obtaining $46000 from PSMAS scandal . She also claims to have been raped during the War of Liberation . She has denied any involvement in the death of Josiah Tongorara. Muchinguri has been linked to a sexual relationship with the late Robert Mugabe and the two are believed to have had a child Tanya. Can you believe her?

In Case You Missed the report on Jacob Mudenda, Read It Here

The allegation against Mudenda was that using his position of senator and Governor he acquired and purchased a Scania truck from Willowvale when he was not entitled to do so, sold it and made a very large profit.

The evidence given by Mabhena, Gibson and Verwey can be summed up as follows:-

Early in 1988 Mudenda contacted Mabhena, who was Deputy Secretary in the Ministry of Industry and Technology and Chairman of Willowvale, and indicated that he was looking for a Scania truck to purchase. He said that his family ran a haulage business and that he wanted to improve his ageing motor vehicle fleet. Because of Mudenda’s position as Governor, Mabhena accepted his word and therefore, did not check his story. However, as Willowvale did not have Scania trucks then, Mabhena advised Mudenda to contact Tandem (Pvt.), the Scania truck distributers. It subsequently transpired, however, that there were three Scania trucks which were to be allocated to the National Railways of Zimbabwe (NRZ) which NRZ could not take because the trucks did not meet its specific requirements. Mabhena contacted Gibson and asked him to help Mudenda and sell one of the trucks to him. As the request had come from the Chairman of Willowvale, Gibson as Managing Director of Willowvale accepted that was a reasonable one.

Accordingly, he contacted Tandem (Pvt.) Ltd. And asked the latter to sell of the trucks to Mudenda. Tandem’s sales manager, Verwey, was asked to give priority to the supply of a new vehicle to Mudenda. A few days later Mudenda contacted Verwey and wanted to know when the Scania truck and trailer would be delivered. He was told that it would be a matter of weeks. In the meantime, Mudenda contacted a director of Monarch Products (Pvt.) Ltd. In Bulawayo and asked him if that company wanted to buy a Scania truck and trailer. He received a reply in the affirmative. Mudenda then indicated that the purchase price would be $465 000 and that he required the sum of $350 000 to be paid immediately, though the balance of $115 000 could be paid later. This was agreed upon.

Consequently, on the 4th July, 1988 Mudenda was paid the sum of $350 000 by cheque and on the 11 th July, 1988 he was paid a further $65 000, again by cheque, leaving a balance of $50 000 which was paid later in cash. All these payments were made to Mudenda before he purchased the truck and trailer. Neither the truck nor the trailer had been delivered to him when the payments were made.
Subsequently, on or about the 14th July, 1988 a representative of Monarch Products arrived at Tandem’s premises and spoke to Verwey. He wanted to see Monarch Products’ new truck. As Verwey did not know anything about Monarch Products buying a new truck he told the representative that there was no new vehicle for Monarch Products. However, the representative advised Verwey to telephone Monarch Products. Upon doing so Verwey was advised that Monarch Products had purchased the truck and trailer from Mudenda. Believing that this was not fair to his customers on the waiting list, Verwey tried to stop the sale of the truck and trailer to Mudenda but was advised by Gibson to let the sale go through. The total purchase price for the truck and trailer was $387 808.25. When Mudenda was informed of the full purchase price he stated that he was paying for the vehicle by cheque. However, because of the high amount, it was agreed that Mudenda would pay to Scotfin in Bulawayo and that Scotfin would in turn pay Tandem (Pvt.) Ltd from their Harare office. On the 21st July, 1988 Tandem (Pvt.) Ltd received full payment for the trailer from Scotfin in Harare and Willowvale received full payment for the truck from the same source.

Mudenda’s evidence was as follows:-

He first considered buying a truck in 1985.At that time his late father was operating a refuse removal service in Dete Township using a scotch cart. This was a very small business and Mudenda decided to buy a large truck which his father could use in order to expand his business interests. Accordingly, he contacted Tandem (Pvt.) Ltd. . Subsequently at the beginning of June 1988 he was informed by Tandem (Pvt.) Ltd that the truck might be ready but that it would take time before the trailer was assembled. He was informed about the full purchase price of the vehicle and his intention at the time was to enter into hire purchase agreement. However, after his father died on the 27th June, 1988 things changed and he decided to sell the truck and trailer. He approached Monarch Products (Pvt.) Ltd which company agreed to purchase the truck and trailer for $465 000.After the purchase price had been paid to him he in turn paid for the truck and trailer. He made a profit of $79 000.

The Commission was satisfied that Mudenda was an unreliable witness and, therefore, had no hesitation in rejecting his story. It was quite clear to us that he had simply discovered, as other people had done, that this was a simple way of making money for himself without spending a cent from his own pocket. Indeed we are satisfied that if there had been no publicity about “Willowgate” he would have purchased another truck from Leyland and resold it. We say so because on the 25th January, 1989 he sent the following letter to Leyland’s Sales Manager:

“I confirm out telephone conversation today 25/1/89 and request you to offer the vehicle against my name to Mr Paul Demontille and Company who are desperate for transport. I personally no longer need the vehicle”

It is our view that he abandoned the plan to purchase the vehicle because of the publicity in respect of the purchase by him of the Scania truck. When he was questioned as to whether he had contacted Leyland by letter or by telephone or in any other manner at any time this year he said he had not. However when he was shown the letter set out above he was taken by surprise and had to admit that he had given us false evidence. It is our view that he committed perjury for which he should be prosecuted by Attorney-General.

Because the Scania truck is not subject to price control, Mudenda did not contravene the price control legislation. However it is our view that this was profiteering at its worst. The Governor used his position to acquire the truck quickly, resold it and made huge profit without spending one cent of his own