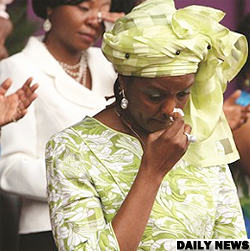 Mutsvangwa, who has since been expelled from Zanu PF, lifted the lid on the no-holds-barred-exchange that reportedly left Grace in tears.

The two who were erstwhile allies ahead of the Zanu PF congress in December 2014 after they teamed up to demolish former vice president Joice Mujuru’s presidential ambitions, fell out after the congress that saw Mujuru being expelled from her State and party job and Grace being elevated to be the new women’s league boss.

Apparently, Muchinguri-Kashiri was livid with the secretary for transport position she was appointed to at the 2014 congress, and felt it was not commensurate with her illustrious contribution to the Mujuru demolition job.

Muchinguri-Kashiri reportedly protested in the politburo that she had helped land Grace a plush job as women’s league boss while she got an insignificant post. This did not go well with Grace.

The two reportedly clashed in angry scenes in the politburo, and Grace had to appeal to Vice President Emmerson Mnangagwa to restrain Muchinguri-Kashiri, who was going hammer and tongs against her. Apparently, Grace had suggested that Muchinguri-Kashiri wanted her husband, President Robert Mugabe.

Recalling the incident during his short spell as a Cabinet minister, Mutsvangwa narrated shocking details about the confrontation instigated by Muchinguri-Kashiri suggesting that Grace has been failing to politically recognise her in the ruling party’s pecking order.

“Let me tell you something, I was in the politburo and now I am a historian like the president. There is a tiff between Oppah Muchinguri and the first lady. They shout at each other and then Oppah gets the upper hand, she is a comrade you know and comrades know their stuff.

“She was not taking any nonsense and she threw it back, someone ended in tears, and appeals to the vice president Mnangagwa, not her husband, and what comes out from her mouth is ‘comrade vice president, please protect me, all the women from the liberation struggle don’t like me because I married the man who was number one during the liberation struggle. All the girls left (the country for war) when they were young and not to find husbands’.”

Mutsvangwa said when Grace spoke, he thought that Mugabe would rebuke her, but to his dismay, the president kept his silence as the women slugged it out.

“We are now being told that the people who went to the war, it was a reed dance to be married to one man,” Mutsvangwa said sarcastically.

“I thought that somebody was going to discourage her and say these young girls are the ones who made me the commander-in-chief but that somebody was mute, and that slam went unchallenged, that is when I gave up. I said I cannot be part of this lot,” said Mutsvangwa.

The war veterans leader was expelled from Zanu PF in July last year over a slew of allegations.-Dailynews