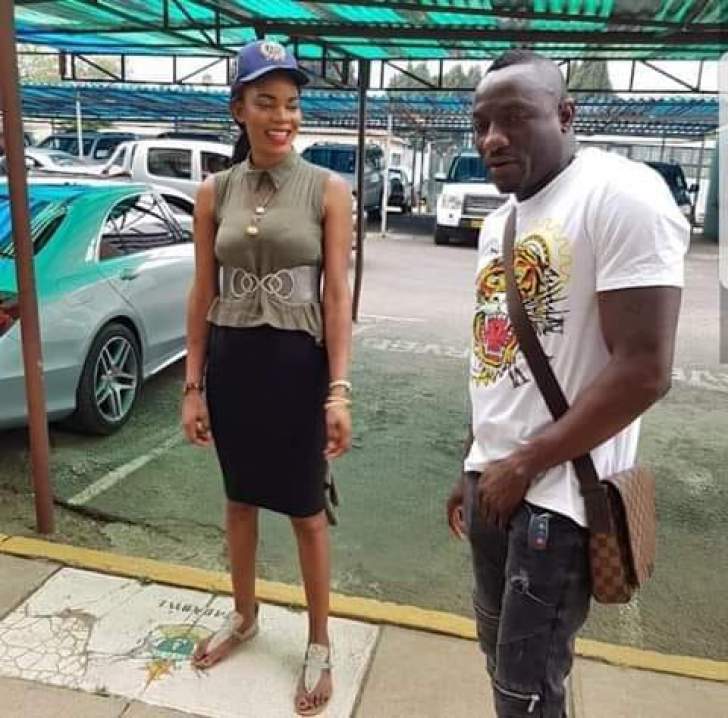 Thinking that her husband was dying, drug addict Marry Chiwenga nee Mubaiwa, a 38-year-old former model and ex-wife of footballer Shingi Kawondera is reported to have stolen up to $100 million from Vice President General Constantine Chiwenga and treats boyfriends to expensive holidays, reports say.

Unverified reports say while General Chiwenga was battling for life in China where Marry was banned from visiting, she broke into the safe at their Borrowdale home and stole all its contents worth a staggering $100 million.
“Marry actually stole US $70 million in cash and US$15M worth of solid unrefined gold from the General’s safe at his Borrowdale Palace when he was away for medical treatment. Merrythought the General will never recover so she helped herself with the loot. So the General wants his money back from Merry or she will die in Prison or by accident if freed from Chikurubi”, an unnamed source said

If proven to be true , Chiwenga will not be the first ZANU PF official to loose huge sums hidden at home.

In January this year President Mugabe lost early $1m (£914,000) in cash was stolen from a briefcase at his rural home in Zvimba . On his death , he left $10 MILLION in cash and it was reported in 2017 that Mugabe keept his money at home.

President Robert Mugabe unwittingly confirmed Zimbabwe’s worsening rot — which is widely blamed on him and his misfiring government — when he revealed during his annual birthday interview with the ZBC in 2017 that even he kept money at home fearing bank failures.

Mugabe also hinted in that televised interview that Zimbabwe should adopt the South African Rand to mitigate the country’s severe liquidity and cash challenges.

But it was the nonagenarian’s rare, frank and ready admission that he too, along with many other Zimbabweans, kept his money at home rather than with banks that surprised observers.

“They (ordinary Zimbabweans) carry those earnings into their pillows and briefcases back home and hold funds back home and become reluctant to release them. Then the banks will not have any resource and will continue to talk of illiquid banks in the system.

“That is what has happened. Dzimba idzi dzizere nemari (Many homes are full of cash). Tikati kumapurisa nemasoja (If we instruct the police and soldiers to) go house by house and dig for the funds that are being hidden there . . . You will be guilty and I will be guilty.

“I don’t know who will not be guilty here … Dzimwe nguva ukaona tumari twako wotya kuti aah ndikanoisa uko kuti ndizonoitora mangwana hapana (If you have savings you will be afraid of depositing them in the bank because tomorrow you may not get that money).

“So you tend to keep it. It’s not your fault . . . It’s the fault of a system that has not yielded enough cash. Mind you, the (American) dollar is not our currency,” Mugabe said.

He spoke as long-suffering Zimbabweans continue to experiences pain and chaos at banks as they desperately seek to withdraw their money.

This is despite the government’s recent introduction of bond notes in its desperate bid to improve the availability of money.

On its part, the Reserve Bank of Zimbabwe (RBZ) has blamed the shortages of cash on rampant externalisation and high imports.

Last month one of the government’s advisors, Ashok Chakravarti,  revealed that the country only had $304 million in hard cash in circulation, including $73 million in bond notes.

“If you look at comparative studies from other economies cash to deposit ratio should be between 10 (percent) to 12 percent. If an economy has got less than 12 percent, it faces a liquidity crisis … We need $900 million in cash to have adequate liquidity,” he said.

And as Zimbabwe’s economy continues to die, the World Bank last year downgraded the country from its list of improved economies to the unflattering tier of struggling countries, as Harare’s political and economic turmoil continues to escalate.

In its publication titled Africa’s Pulse, the Bretton Woods institution said the country had failed to register significant economic growth over the past few years.

“Zimbabwe’s fiscal deficit has deteriorated as remedial actions have been limited and this has resulted in the country registering a negative correlation between the cyclical components of government consumption and GDP,” it said.

Meanwhile, economists also say average incomes in Zimbabwe are now at their lowest levels in 60 years, with more than 76 percent of families having to make do with less than $200 a month.

This, they add, means that poverty levels have reached “numbing levels”, amid indications that the situation will worsen in 2017, as the government continues to demonstrate its inability to fix the Zimbabwe rot.