written by 3 years ago 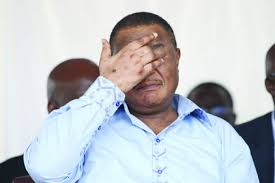 It is alleged Gen Chiwenga did not return to the house until 2014 after Mauchaza was evicted following a High Court order. He discovered that the two guns were missing from the gun cabinet.

Mauchaza had been summoned to appear in court yesterday to answer to theft charges, but the trial did not proceed because Gen Chiwenga failed to attend court as he was said to be attending to national business.

Prosecutor, George Manokore, advised Mauchaza that they would be re-summoned on another date yet to be advised.

It is the State’s case that on April 13, 2010, at around 11PM, Gen Chiwenga left the Borrowdale home where he was staying with Mauchaza as husband and wife.

Gen Chiwenga reportedly left everything in the house, including keys to the safe and gun cabinet. The State further alleges that during the separation period, Gen Chiwenga left three rifles in the gun cabinet, namely a 38 calibre Webley revolver, a 416 calibre Remington and a 577 tarronosaur hannibral rifle.

A divorce was later filed at the High Court and, according to a High Court order, Mauchaza was to vacate the house at number 614 Nick Price Drive, Borrowdale. On October 3 last year, the deputy sheriff went to the house to evict Mauchaza. That is when it was discovered that two guns were missing from the gun cabinet.

Gen Chiwenga tried to recover his guns from his former wife but to no avail, prompting him to make a report to the police.

In 2012 , it was reported that Army commander General Constantine Chiwenga, trying to divorce his wife Jocelyn,  told the High Court that he was driven away from their matrimonial home because she subjected him to ‘violent beatings’.

Although the media has been gagged from covering the high profile divorce trial, juicy details of both Jocelyn and Chiwenga’s affidavits are leaking to the media. Chiwenga admits to constantly being beaten and says she once violently attacked him while he was sedated and she also pushed him off the bed.

In another hair raising incident, Jocelyn allegedly arrived at the army headquarters and demanded US$300 000 from Chiwenga. When the army boss could not fork out the amount she went into a fit of rage and trashed his office destroying picture frames, vases and ornaments in front of his junior officers.

Chiwenga in his court affidavit says he left the office and sought refuge at their family home in Borrowdale Brooke. The army chief says because he was “feeling sick” he called his physician, Dr Paul Chimedza, who attended to him and administered some sleeping medication.

While Dr Chimedza watched over his drowsy patient, Jocelyn allegedly burst into the room shouting at the top of her voice. “She jumped into General Chiwenga’s bed and beat him up on his face with clenched fists. As he was sedated, he could not defend himself,” his lawyers claim.

“When Dr Chimedza thought he had calmed Jocelyn down, she then pushed General Chiwenga off the bed. He fell to the floor and hit his head against the step of the platform on which the bed rests.

“As a result of the fall he injured the right side of his head. General Chiwenga was bruised and swollen from assaults. Owing to sedation, he was helpless,” the affidavit claims.

Chiwenga’s problems did not end there. When he eventually sat on the bed, Jocelyn charged at him again threatening to kill him with a spear and axe.

Jocelyn is demanding $40 million from Chiwenga’s new wife as damages for allegedly offending her feelings and cohabitating with her partner. The army chief married Mary Mubaiwa, a former supermodel and ex-wife of former Zimbabwe soccer international player, Shingirai Kawondera.

Last year in November Jocelyn Chiwenga, claimed her marriage involved periods of physical and emotional abuse by her husband. She claimed that her husband used to beat her up and then send her to Malaysia for treatment.

Jocelyn said Chiwenga also threatened to shoot her if she ever reported the assaults to the police. “If anything happens to me after the publication of this story, the nation should know it came from Chiwenga,” Jocelyn said at the time.-originally published in July 2015