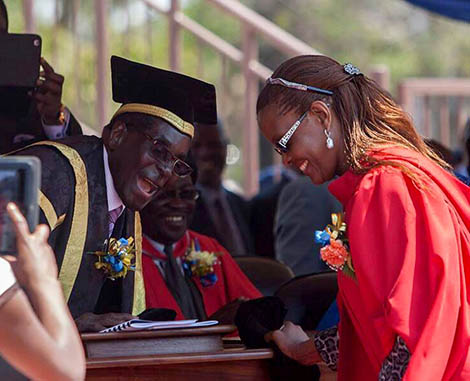 Former first lady Grace Mugabe’s 2014 PhD was awarded in line with University of Zimbabwe rules and regulations, its then vice-chancellor says

Former first lady Grace Mugabe’s controversial doctor of philosophy (PhD) degree was awarded in line with the University of Zimbabwe rules and regulations.

This is according to Prof Levi Nyagura, who was the university’s vice-chancellor when the degree was awarded in 2014. At the time, Grace’s husband, the late president Robert Mugabe, was university chancellor.

Appearing in court for the first time after the Zimbabwe Anti-Corruption Commission (ZACC) completed its investigations, Nyagura, through his lawyer Tawanda Zhuwara, denied any wrongdoing.

“To the accused’s knowledge, the conferment of the application was done lawfully and in accordance with the latitudes afforded such functionaries,” he said.

He also “strongly denies any unlawful act or illicit intent”, and argued that the university to date has neither withdrawn, cancelled nor disowned the degree conferred on the former first lady. This was proof of “the fact that it is authentic and deserved”.

Zimbabwean professor arrested over Grace Mugabe’s dodgy PhD
The highest-ranking official at the University of Zimbabwe has been picked up by the Zimbabwe Anti-Corruption Commission.

Part of the investigations by ZACC allege that Nyagura took lecturers to Grace Mugabe’s orphanage where they could examine her. There are also claims that Nyagura personally accepted her application without the knowledge of the university’s sociology department.

The state is yet to prove that the degree was awarded within months after Grace Mugabe enrolled at the University of Zimbabwe.

Her 226-page thesis titled “The changing social structure and functions of the family: The case of children’s homes in Zimbabwe” – was published in 2018 and made public by the university.

The document is dedicated to her late husband, “because of his dedication and commitment to the wellbeing of the people of Zimbabwe”.