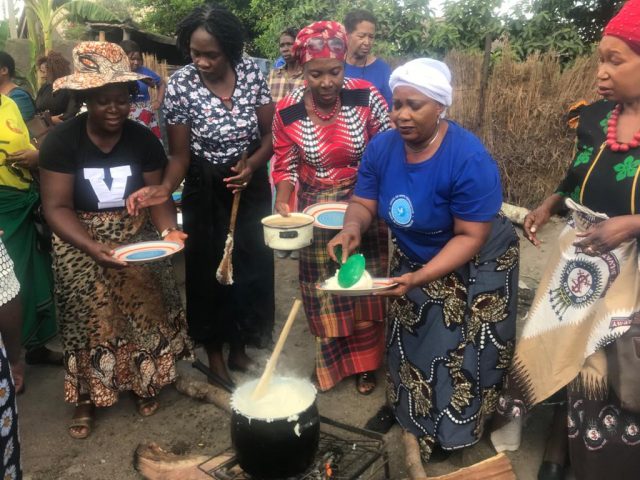 First Lady Auxillia Mnangagwa has encouraged the Zimbabwe Prisons and Correctional Services (ZPCS) to embrace traditional foods as part of the prison diet as they are healthier and cheaper.

She said this yesterday at the Marondera Female Open prison where she took her Amai’s Cook-out Traditional Meal competition that saw 20 inmates battle it out for the best traditional meal.

The First Lady, through her Angel of Hope Foundation, introduced the competition to ensure Zimbabweans across the country embraced traditional dishes and learnt how best to prepare them.

Traditional dishes are rich in nutrients and readily available in communities, which makes them easily accessible.

“When I started this cooking competition, I was targeting everyone. I did not discriminate to say the elderly, those with disabilities, men or women in prisons could not be part of it. Everyone should get an equal opportunity.

“Our culture and traditions do not change just because someone is in prison. This is why I decided to come here and spend time with you regardless of the venue,” she said.

The First Lady added that all women, even those in prison, needed the knowledge of preparing traditional meals which they would use when they rejoin the community.

First Lady Auxillia Mnangagwa talks to female inmates as they arranged kitchen utensils in a kitchen designed and built by the First Lady.

She also said being imprisoned should not stop them from showcasing their talent, which could earn them a decent living in future. Amai helped to neatly shelve utensils in the kitchen hut which she designed and built for the inmates.

The kitchen, a big round hut, will be accessible for all inmates to utilise once the construction of the open prison is complete. She promised to provide more utensils for the shelves.

“I encourage the Zimbabwe Prisons and Correctional Services to include these traditional dishes in their diet. It is important for us to eat them so that we can boost our immune systems and maintain healthy bodies.

“They are also good for breastfeeding mothers as certain foods increase the production of milk for the baby,” she said.

Amai promised to send bags of dried vegetables to the prisons to encourage the eating of traditional foods.

The kitchen which was designed and built by the First Lady Auxillia Mnangagwa for female inmates.

She also encouraged Zimbabweans to take advantage of the good rains received this year to grow traditional grains that will improve the food security situation.

Mashonaland East Provincial Affairs and Devolution Minister, Aplonia Munzverengwi, said taking the cooking competition to prisons was a positive step in rehabilitating inmates and preparing them to rejoin society.

“This will help them to prepare for a better life. You have given them a chance to showcase their prowess in cooking using traditionally available resources and appreciate the health benefits of these foods.

“Everyone should take today’s lesson and know that good health comes from good food,” she said.

First Lady Auxillia Mnangagwa talks to female inmates as they arranged kitchen utensils in a kitchen designed and built by the First Lady. — Pictures: John Manzongo.

The inmates expressed their gratitude to the First Lady for taking her time to interact with them, and teach them about traditional foods.

Some of the dishes prepared by inmates at Marondera female open prison yesterday.

Melody Maodzwa said some inmates had been forsaken by their relatives and such programmes made them feel loved.

“We know about traditional foods that our forefathers used to eat and we are now taking this knowledge and applying it in our lives,” she said.

Moreblessing Nyamutata said Zimbabweans should take the growing traditional foods seriously as they could protect them from various diseases.

“We will apply this knowledge when we leave this place because we now know how they can help us,” she said.

First Lady Auxillia Mnangagwa hands over a prize to the female inmate who cooked the best dish.

The inmates also thanked the First Lady for initiating the construction of the Female Open Prison as it will make the lives of female inmates easier.

Zimbabwe Female Open Prison Foundation chairperson, Mrs Roselyn Musarurwa-Charehwa, said the prison was the first of its kind in Zimbabwe and the region and that its construction will change the lives of all female inmates in the country.