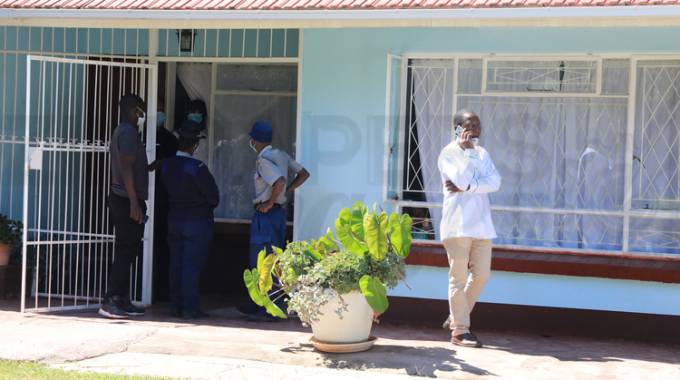 The family of African Apostolic Church leader Archbishop Paul Mwazha, popularly known as Mudzidzisi, was yesterday involved in an altercation over the succession of the respected religious leader who is one of the pioneers of indigenous churches in Zimbabwe.

The altercation, which took place at the Archbishop’s Hatfield residence involved his second born son Mr Alfred Kushamisa Mwazha and other family members.

Matters came to a head when Alfred, who is claiming to have been appointed successor by his father, and his entourage, which included his two elder brothers, forced their way into the property reportedly to initiate the succession ceremony.

They were stopped by Alfred’s nephews Nyasha Mwazha and Malcom Chapfunga, who argued that the Archbishop preferred his youngest son, Tawanda, who was away, to succeed him.

Police drove to the house after being told that journalists had forced their way into the residence, but left after the factions cleared the air.

Both parties said they were basing their argument on a letter written by Archbishop Mwazha’s aide on the instructions of the church leader earlier this year, stating that Tawanda should continue presiding over the holy communion ceremony in the church.

He also indicated that Tawanda should be accompanied by Alfred to buy items for the ceremony.

Alfred argued that Archbishop Mwazha said he should lead the church because his two elder brothers were no longer eligible for the position since they had both left the church to join the Seventh Day Adventist and Johanne Marange churches.

“When the aide wrote what my father had said, the paper was read to all the sons. We had come so that the letter could be read again, but as you can see our nephews are not allowing us into the house to see our father,” he said.

Nyasha and Malcom, who had been staying with their grandfather since the death of their grandmother, the Archbishop’s second wife, said Archbishop Mwazha had clearly indicated that Tawanda had the same gifts as him.

The two showed The Herald videos shot at a church event where Archbishop Mwazha declared to his congregation that Tawanda was the one who would stand in for him whenever he was not available.

“Of all my sons, he is the one who has the same gifts as me,” he said in the videos.

Nyasha argued that it was reckless for his uncle, Alfred, to bring people to the house for the succession ceremony when the country was battling Covid-19.

“Our grandfather is now old and we have been told that old people are susceptible to Covid 19; why then bring all these people here and endangering his health?

“Besides, why do they want to succeed the Archbishop when he is still alive?”

“If he was genuine, he knows that he should consult all his brothers and the church’s board of trustees entrusted by Archbishop Mwazha,” he said.

“We abide by the church constitution and if there is a decision to be made, all the sons should unanimously agree. They can also consult the chair of the board of trustees,” he said.

COVID-19 positive Zimbabwean man refuses to be taken for isolation