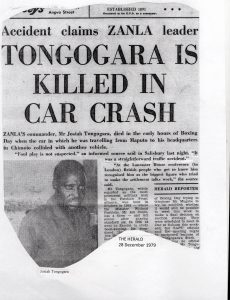 ZANLA’s commander, Mr Josiah Tongogara, died in the early hours of Boxing Day when the car in which he was travelling from Maputo to his headquarters in Chimoio collided with another vehicle. “Foul play is not suspected,” an informed source said in Salisbury last night. “It was a straight forward traffic accident.”

“At the Lancaster House conference (in London) British people who got to know him recognised him as the biggest figure who tried to make the settlement talks work,” the source said.

Mr Tongogara, widely regarded as the most prominent military man in the Patriotic Front alliance, was born in Selukwe now Shurugwi in 1938 – where the Minister Without Portfolio, Mr Ian Smith, has a farm – and left school after passing Standard Six.

In 1960 he went to Zambia to study book-keeping. He abandoned these studies to join the nationalist movement.

He studied guerrilla warfare in China and after further travels in the Middle East and a period during which he studied politics, he became ZANLA’s military supremo.

He was in the news in 1974 when he attended talks in Lusaka by various Black Nationalist leaders, and again in 1975, when he was imprisoned for suspected complicity in the murder of Mr Herbert Chitepo, ZANU’s chairman, who was killed in a car bomb blast in Lusaka.

His death was confirmed by ZANU (Mugabe) military sources in Maputo yesterday. He was married with three children.

This week marks the 42nd anniversary of the death of one of the luminaries of the liberation struggle – Josiah Magama Tongogara. He was a larger than life figure.

Since then, the Josiah Magama Tongogara Legacy Foundation has been set up to advance his vision.

Cde Tongo, as he was affectionately known, was a revolutionary whose vision was to establish a free and democratic Zimbabwe devoid of discrimination and oppression on the basis of one’s skin colour.

There are a number of conspiracy theories about his death. The allegations and counter-allegations need to be verified and fully investigated. We have said it before and say it again, that certain classified information need to be declassified. Museums in the region and overseas have more information about our heroes than our local information resource centres.

His widow, Senator Angeline Tongogara and son were among the first to surrender his service pistol to the Museum of African Liberation under construction by the Institute of African Knowledge in Harare.-Herald