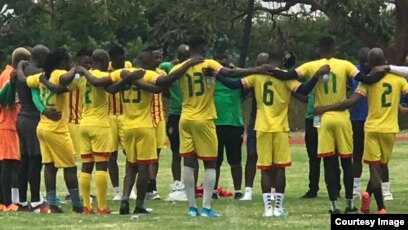 The Sport and Recreation Commission (SRC) says it is not losing sleep over a Fifa ultimatum to reinstate the suspended Fifa board by January 3rd, claiming they have not received a letter from Fifa to that effect.

SRC chairman, Gerard Mhotswa, says they only heard through the press of a letter written to them by Fifa to reinstate Kamambo.

The letter from Fifa to suspended Zifa Chief Executive Officer, Joseph Mamutse, gives the SRC up to January 3 to reinstate Felton Kamambo and colleagues or risk Zimbabwe being thrown out of international football.

This comes as a full compliment of African-based Zimbabwe’s Warriors is in camp ahead of their departure for Cameroon for the 2021 Africa Cup of Nations finals starting on Thursday.

Even Prince Dube, who has been scoring at will for Tanzanian club Azam, has joined camp and so too are South African-based Kuda Mahachi, Ishmael Wadi, Onismo Bhasera, Talbert Shumba, Knox Mutizwa, and Gerald Takwara.

Tino Kadewere, Jordan Zemura, David Moyo, and Admiral Muskwe who are based in Europe and captain Knowledge Musonda, plying his trade in Saudi Arabia, are flying straight from their bases to Cameroon.

Coach Norman Mapeza will trim the squad to the traveling 23 tomorrow ahead of departure on Thursday.-VOA

What happened to the Reserve Bank of Zimbabwe list of forex auction beneficiaries?