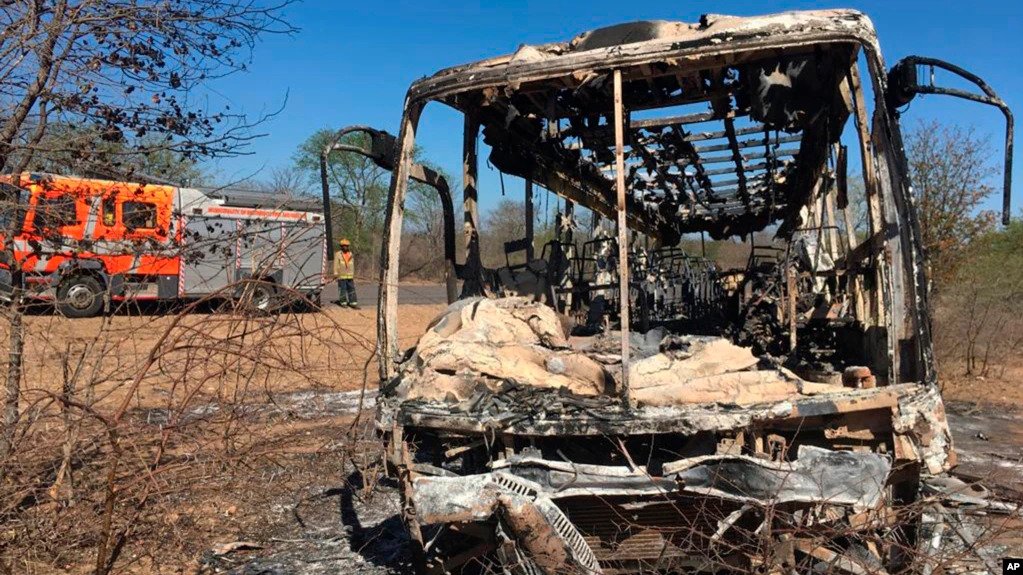 A large number of Zimbabweans were on Friday burnt beyond recognition when a bus collided with a fuel tanker in the country’s Manicaland province, according to the state-controlled Zimbabwe Broadcasting Corporation (ZBC).

The ZBC reports that the bus belonging to Beta Private Limited allegedly collided with the tanker, which burst into flames and people were burnt beyond recognition.

Police spokesperson, Assistant Commissioner Paul Nyathi, was unavailable for comment as he was not responding to calls on his mobile phone.

Nyathi, who could not release the number of the casualties, told NewsDay newspaper that police are investigating the accident.

He said, “We received the disturbing news that a bus collided with a fuel tanker on that road. The bus was coming from Harare. Some people have died, and some were left with serious injuries. Our officers are there on the ground…We will release more details later during the night.”

According to the ZBC, only seven out of dozens of passengers were pulled out of the inferno with serous burns.

The ZBC quoted witnesses as saying the bus, which was traveling from Harare to Mutare, was reduced to a metal hulk.

Meanwhile, police report that a person was killed and eight others were injured on Wednesday in a road traffic accident along the Masvingo-Beitbridge Highway.

The ZRP reports a fatal road traffic accident which occurred on 23/12/21 at 1400 along Masvingo –Beitbridge highway at 235 km peg in which one person died while eight others were injured.

In a tweet, the police said the Marcopolo bus with 29 passengers on board “which was travelling to Masvingo veered off the road and overturned before landing on its roof after the left front tyre burst.

“Takawira Chitendere (49) died on the spot and his body was taken to Beitbridge District Hospital for post-mortem while the injured are admitted at the same hospital.”

US lifts restrictions on Zimbabwe