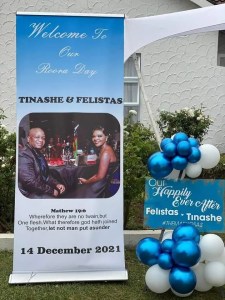 Congratulatory messages have been pouring in for Mai Titi on her Facebook page.

The couple recently tied the knot in America during an intimate white wedding ceremony. Their wedding came as a surprise to many as they had not been together for long.

Soon after, the couple jetted into the country to proceed with traditional marrying processions.

In other news, iHarare reported that socialite and businesswoman Olinda Chapel Nkomo will be renewing wedding vows with her husband Njabulo who is popularly known as Tytan.

Dear friends and family, invites to follow, in the mean time save this day for us.

Tytan and Olinda separated in August 2019 just after celebrating their first wedding anniversary.

However, late last year, the couple who share a daughter reconciled and took to social media sharing pictures enjoying some quality time.

iHarare had also reported that Zimbabwe Warriors captain Knowledge Musona is in mourning following the death of his brother, George.

Musona announced the death of his brother on his social media page, in which he revealed he was in anguish.

Musona did not reveal how his brother had died, only that he is currently hurting due to the nightmare he is in.