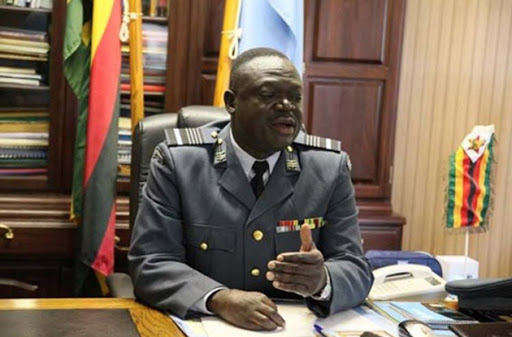 Agriculture Minister Perrance Shiri, who has died at age 65, was the first commander of the 5 Brigade, the unit that had a lead role in the Gukurahundi massacres. He served as commander of the Air Force of Zimbabwe before his appointment as Minister, following the military coup that brought President Emmerson Mnangagwa to power in 2017.

Below, we publish select texts from “The Army and Politics in Zimbabwe: Mujuru, the Liberation Fighter and Kingmaker”, by scholar Blessing-Miles Tendi. These excerpts relate to the struggle years and Shiri’s time at 5 Brigade.

On Shiri’s role in a retaliatory attack on the Rhodesia, following the Chimoio massacre in 1978:

The dramatic highpoint of ZANLA’s 1978 intrusions in Rhodesia was its destruction, in December, of millions of gallons of fuel at a large storage depot in the capital city Salisbury. The attack cost the RF government several millions of dollars and its psychological effect was significant because it demonstrated to urban white Rhodesians that the war was no longer simply confined to the countryside. Nhongo, Tongogara, Gava, a female guerrilla called Comrade Chamu (Oppah Muchinguri), who was Tongogara’s personal assistant, and Perrance Shiri attended the High Command meeting, at which plans to carry out a sabotage operation in Salisbury were laid.

At the meeting, Gava suggested ZANLA attack Salisbury’s primary sewer treatment plant. ‘The idea was to make the whole city stink sending a message of how serious we were and to show that the Rhodesians were not as secure as they believed’, a ZANLA commander explained

ZIPRA was not exclusively a regular army. It contained a guerrilla wing, part of which developed grievance with some ZIPRA leaders who it claimed favoured ZIPRA regulars for integration in the ZNA.

A ZANLA officer involved in operations against dissidents in Matabeleland elaborated the point: “Shiri [inaugural commander of 5 Brigade, tasked with ‘hunting dissidents’] went back to Mnangagwa with messages from dissidents that they wanted to sit down and discuss their grievances and one of these grievances was that some of the dissidents were unhappy with their ZIPRA commanders.

They were saying their commanders like Masuku and Maseko were not fighters. They had never been to the front to fight [the RSF] but they were the ones who were up there after independence as the commanders, deciding who in ZIPRA joined the army.

I attended a meeting with Shiri and Mnangagwa where Shiri said this after coming back from Matabeleland. The dissidents were saying, ‘We are guerrillas and we were sidelined from the army by these commanders who never fought. They have pushed conventional soldiers into the army at our expense.’

On Shiri’s view of 5 Brigade, the unit he first commanded

When 5 Brigade finished its training, the troops’ perception of their task was not to fight “a small guerrilla force” but “being ready for big fire fights”, representing national military power’, (Emile) Munemo elaborated.

Consequently, when 5 Brigade was told by Mugabe that it would be targeting dissidents in Matabeleland the soldiers considered this ‘a big bore’, Munemo concluded.

Munemo’s representation of 5 Brigade as a sophisticated conventional force was disputed by Smith, who pointed out that ‘once they [5 Brigade] were deployed [to Gweru, Ntabazinduna near Bulawayo and Gokwe] all sorts of administrative problems arose, so I got people coming to see me to say please come and teach them how to administer themselves, to do logistics’.

(BMATT Commander 1982-3 Colin) Shortis concurred with (BMATT deputy commander 1980-2 Rupert) Smith, Smith’s account of the dysfunctional nature of the brigade, noting: ‘I had a chat with Shiri about the [North Korean] training when he had been removed as the 5 Brigade commander. Even Shiri admitted the brigade was poorly trained.’

On the ‘indisciplined’ 5 Brigade

5 Brigade exhibited indiscipline early on in its existence. For instance, in December 1981, a group of foreign tourists unintentionally drove into a prohibited zone that was part of 5 Brigade’s training ground. The tourists were physically assaulted by 5 Brigade soldiers and were it not for Shiri’s mediation the foreign visitors would likely have come off even worse.

And in July 1982, three British tourists were shot dead by 5 Brigade soldiers in Nyanga. Such uncontrolled behaviour before its operations began in earnest in January 1983 was a sign of worse occurrences to come. Additionally, 5 Brigade suffered from lack of cohesion in its officer corps because of various divisions during training.

For example, one 5 Brigade battalion commander (ZANLA) commented: “I was sent there [to 5 Brigade] as a pacifier between Shiri and a ZIPRA soldier whose name I cannot remember. This ZIPRA man was the deputy [commander of 5 Brigade]. He looked like a coloured [mixed race individual]. This ZIPRA and Shiri were having clashes about who is the boss. Shiri was the commander but this ZIPRA was always challenging him. I was sent there as a peacemaker.”

‘5 Brigade was out of control’

An account by an “Officer L” on the disorder in Mugabe’s office over the deployment of 5 Brigade:

It was confusing for (Senior Assistant Police Commissioner Amelio) Svaruka and Shiri [Svaruka served as Shiri’s offsider when 5 Brigade was carrying out its operations]. There was chaos. Things slid badly, so badly. Shiri lost control of his command post. When this was happening [Constantino] Chiwenga was in charge of [ZNA] 1 Brigade [in Matabeleland] and was saying since 5 Brigade is chaotic let me fully get in there now and sort this mess out. I cannot have chaos in my province. 5 Brigade was out of control.

They were doing as they wanted. They were just beating and killing people randomly. Shiri contacted me to say he wanted to pull out from Matabeleland without a directive from the prime minister. I told him he would be charged with treason if he did that. So I went down there with Felix Muchemwa as my army doctor.

I addressed 5 Brigade and told them to behave. I said, ‘How dare you threaten to shoot Shiri?’. Many of them were uneducated. I knew one of them personally. His name was Watson. I said, ‘Watson, you cannot even write your name. You are not an elite force. You were only picked for your revolutionary commitment. You failed to enter the integration army but because we have a duty to our fellow comrades we decided to look after you by putting you in 5 Brigade. Who do you think you are?

Until you change there will be no more food rations, vehicles, nothing for you.’ I went back to Harare and blocked all supplies to them as punishment

As (Pakistani Air Marshal Azim) Daudpota underlined, when  Tungamirai failed to assert his authority in the air force, he turned to Nhongo for assistance:

“When Shiri joined the air force…he was causing some problems, and I reported them to Tungamirai…on the second occasion of Shiri’s misbehaviour, Tungamirai took me to General Nhongo, who felt very sorry. He called Shiri to his office and in our presence he gave him a real dressing down. He warned him that he would send him to Chikurubi prison if he ever acted funny with me. Thereafter I counselled Shiri and told him that he should go to the UK for the RCDS one-year course which would broaden his horizon and groom him for higher appointment.”

On who was to succeed Solomon Mujuru:

On the other hand, Chiwenga’s loyalty to Mugabe was, at the time, more stable and his animosity towards Solomon ran deeper than that of (Vitalis) Zvinavashe. Solomon did not support Chiwenga’s promotion from ZNA to ZDF commander in 2003.

In the contest between Chiwenga and Shiri, the two most senior serving officers in the military, to become the next ZDF commander, Solomon preferred the latter candidate but Shiri declined the offer of promotion, citing poor health.

[Click to read – ‘How Mujuru’s mystery death deepened my resolve to tell his story’: newZWire in conversation with author Miles Tendi]

The Army and Politics in Zimbabwe: Mujuru, the Liberation Fighter and Kingmaker, is available in Zimbabwe at Innov8 book stores, Weaver Press, Exclusive Books in South Africa, and Cambridge Press South Africa. Blessing-Miles Tendi is Associate Professor of African Politics at the University of Oxford.