THE bid by embattled Harare socialite, Genius “Ginimbi” Kadungure, to avoid spending the weekend in remand prison hit a brickwall after his urgent chamber application at the High Court was heard on Saturday before ruling was reserved to today. 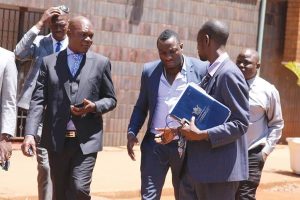 Kadungure sought the intervention of the High Court, claiming the lower court had failed to properly handle his application for bail.

Magistrate Bianca Makwande had asked Kadungure to surrender title deeds of a property as surety as part of his bail conditions.

His lawyer Samukange then volunteered to surrender title deeds to an immovable property valued at $250 000.

After Samukange had brought the title deeds, Makwande changed her decision and ruled that granting Kadungure’s bail would be a security risk.

This prompted Kadungure to seek recourse at the High Court.

Allegations are that between February 2009 and May 2016, Kadungure misrepresented to the Zimbabwe Revenue Authority (Zimra) that his company, Piko Trading, made total sales of $2 777 678 inclusive of value-added tax (VAT), whereas in actual fact, it had made $9 092 952 inclusive of VAT.

The court heard that this was done with the intention of evading paying (VAT).

The offence came to light when Zimra conducted an investigation into Piko Trading’s activities.

The State also alleges that in 2015, Zimra conducted lifestyle audits of socialites after observing their expenditures, which were not matching their tax declarations.

On March 2, 2016, Kadungure was interviewed and advised that he owned a residential property in Domboshava valued at $200 000, a Royce-Rolls motor vehicle valued at R4 million, a Bentley car valued at $50 000, Range Rover valued at R1,1 million, Mercedes-Benz valued at R1 million and a BMW valued at $3 000.

It is alleged Kadungure also told Zimra that he owned furniture worth $20 000 in Domboshava.

The State alleges Kadungure was asked to prove the source of income used to purchase the properties, but he failed to do so.

Investigations by Zimra revealed that between January 2010 and December 2015, Kadungure did not declare income amounting to $9 092 952, being the sales realised from the sale of liquified petroleum gas and $1 191 713 being the value of his properties.

It was also discovered that during the same period, Kadungure imported LPG from South Africa and Zambia and smuggled 5 298 000kg of LPG valued at $672 533.

It was further noted that during the same period, Kadungure failed to deduct pay-as-you-earn (Paye) tax from his 11 workers and also from his salary as a director, thus prejudicing the State of $355 000.

The State alleges that Kadungure prejudiced Zimra of $3 468 949 and nothing was recovered.