Zimbabwe’s listed gold miner, RioZim, has suspended operations for the second time in four months amid failure by the southern African country’s central bank to pay for gold delivered to its gold buying unit, Fidelity Printers. 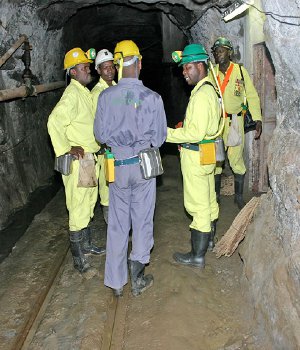 Under Zimbabwean laws, only Fidelity Printers and Refiners have the mandate to purchase gold from miners.

The law also says gold miners can only retain 55% of their earnings in foreign currency, while the balance is paid in local bond notes.

But the sole buyer, Fidelity, has failed to pay for gold delivered, forcing miners to struggle to pay for critical raw materials and consumables needed to keep gold production running.

This is the second time RioZim, formerly owned by RioTinto, has suspended operations.

Government and the central bank previous promisedly not to kill “the goose that lays the golden egg”. But following the announcement that miners would be allowed to keep a larger amount of their earnings in dollar currency, payments have still been slow to materialise.

“As of date, the Company has experienced significant and persistent delays in payment of its foreign currency allocation for deliveries made to Fidelity Printers and Refiners since December 2018 and this has severely affected the viability of the Company’s operations.R

“Consequently, the Company has been recently forced, once again, to voluntarily suspend production across all three of its gold mines pending full payment of its foreign exchange proceeds which requires in order to procure the necessary consumables needed to keep gold production running,” Company Secretary Per Makorie said in a statement.

He said gold earnings made up 90% of the group’s total revenue, and stoppage of the three mines under RioZim had a material impact on performance.

The non-payment of export earnings comes at a time mineral production in the southern African country has been on a decline.