You are at:Home»Main News»Jonathan Moyo Lays Into Grace Mugabe in Shock Outburst After She Blocked His Mobile Numbers

HARARE – Former First Lady Grace Mugabe has had a major fallout with her former ally Professor Jonathan Moyo, apparently after the latter called her “toxic and polarising”. 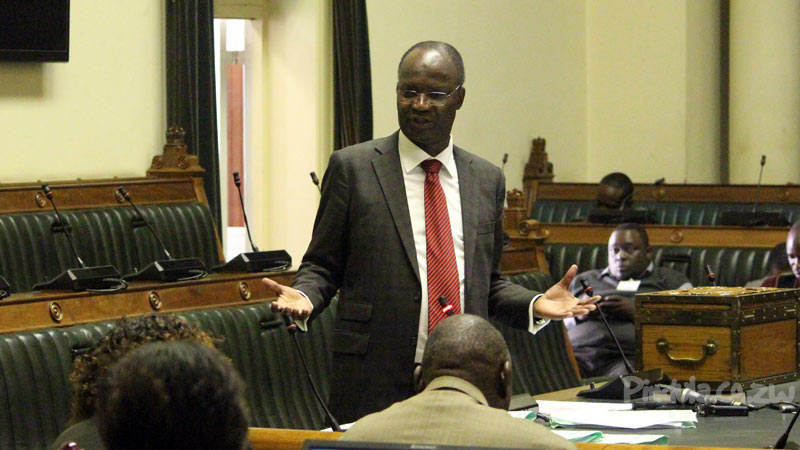 This is revealed by Moyo, who says he has not spoken to former President Robert Mugabe’s wife since June 10 “when she blocked me from all communication”.

Moyo spoke after Grace used the burial of her mother, Idah Marufu, last Saturday to urge her former allies in a Zanu PF faction known as G40 to “move on” from the November 2017 military coup that scattered them from power, with their bitter rival Emmerson Mnangagwa assuming the presidency at Mugabe’s expense.

“Yes, what happened indeed happened. We must move on. We must learn to forgive each other. I have forgiven them,” Grace said, speaking at the burial in Chivhu.

She added: “If the person who was affected the most can forgive, how about you? I’m talking to those who are busy attacking Mnangagwa, let us move on and support him.”

Grace revealed she had been flown back from Singapore, where she was receiving treatment, by a jet hired by Mnangagwa for an estimated $300,000. The government had also picked the bill for the funeral after Mnangagwa told them to “save your little money”, she said.

While some of their G40 allies have retreated to a quiet life, Prof Moyo and Mugabe’s nephew Patrick Zhuwao have been strident critics of Mnangagwa and the military.

Their fallout with Grace, however, was over disagreements on how to steer the formation of the National Patriotic Front – a party that brought together Mugabe’s disaffected supporters.

In a statement, Moyo said he would have loved to extend condolences to Grace in person “but, alas, I was not able to do so after she blocked me from all communication with her on June 10, 2018.

“She did this in an angry response to advice I had respectfully and privately offered to her in writing, against her toxic and polarising wishes to lead the NPF in general and, in particular, against her then active but divisive push to be seconded by the NPF as a vice president in what had been proposed as a Grand National Union (GNU) of opposition forces ahead of the July 30 election. My contact with Mrs Mugabe was slim prior to 10 June, and none since then,” Moyo reveals.

He said he was forced to issue the statement in response to media enquiries, and the fact that The Standard newspaper, which carried Grace’s comments, had mentioned him as one of those to whom the former First Lady’s comments were directed.

Reaffirming his “respect” for former President Mugabe which he said extends to his family, Moyo said “that does not mean we are extending leadership qualities or responsibilities to the spouses.”

He added: “In this connection, while I know and respect the fact that President Mugabe has legions of followers and admirers, not only in Zimbabwe but also across and beyond the African continent, it is news to me that Mrs Mugabe has followers.

“I consider it an insult that some circles, especially in the media, refer to some leaders who worked with and supported President Mugabe as followers of Mrs Mugabe. That’s not only false but it is also nonsensical. Mrs Mugabe cannot be a leader simply because she’s the spouse of our iconic founding leader.

“President Mugabe himself has said on many occasions, including during the funeral of Ambuya Marufu, that Mrs Mugabe could not have been his chosen successor because she lacks political experience to be a national leader.”

Moyo said Grace’s lack of political experience “has always been self-evident and is known by everyone who has interacted with her.”

“The remarks attributed to her in the Standard story are significant only in so far as they betray her lack of political experience, and the toxic, polarising and damaging consequences thereof,” he charged.

The political science professor, who fled the country after soldiers shot at their hideout during the military takeover, was particularly irked by Grace’s claim that she “suffered the most”. The claim was “false and insensitive”, according to Moyo.

“It is an absurd corruption of public morality, values and ethos for Mrs Mugabe to claim that Mnangagwa’s gesture to hire a fancy private plane to fly her from Singapore and to pay for her mother’s funeral constitutes a political paradigm for the country to move on. Narcissism cannot be the basis for politics.

“Mrs Mugabe was indeed well within her rights to thank Mnangagwa for assisting her family at a time of need, but she had no rhyme or reason or right to turn that into a national cause.”

Moyo said Grace had no basis to claim that she was most affected by the military coup. Others had suffered worse, he said.

Former Finance Minister Ignatius Chombo had soldiers shoot their way into his house before abducting him for several days. Former Youth League leader Kudzai Chipanga was also abducted and put on national TV to apologise to army commander and coup leader General Constantino Chiwenga, who was promoted to Vice President after the power grab.

“Does she care about how these victims of the coup have fared since that fateful November day? What does she think moving on means for these people? Does she think it just means hearing that she has been flown in a fancy private plane by Mnangagwa who also ordered the government to foot the bill of her mother’s funeral? Is that what it is all about? Has Mrs Mugabe thought about how Mrs Munetsi and her family struggled to bury her husband?”

Noting that the former First Lady had backed MDC Alliance leader Nelson Chamisa in the July 30 elections, Moyo said the August 1 killing of at least 10 unarmed civilians by soldiers was a continuation of the military takeover of state power that started in November.

“The demonstrators were protesting the election theft that was underway on that day on Mnangagwa’s behalf,” Moyo said. “Does Mrs Mugabe know the names of these victims? Does she know how the massacred victims were buried? Did Mnangagwa provide transport to these victims? Did he pay for the funerals? Did he pay the medical bills for the hospitalised victims? Does Mrs Mugabe care about all this, or she just wants everyone to move on, simply and only because she has moved on after receiving Mnangagwa’s largesse?”

Refusing to back down on his criticism of Mnangagwa’s regime, Moyo said “Mrs Mugabe can move on with Mnangagwa”, adding: “But the people are not going to be part of that movement. The people are moving in a different direction. Their vote was stolen. Their compatriots were murdered in cold blood and some were maimed; and their livelihoods were destroyed. This happened last month. The victims are still crying for justice. Decent Zimbabweans want to see justice done; and they want to see the people’s vote respected.”

Going forward, Moyo said, “Mrs Mugabe will be well advised to understand that… there’s need for mutual respect to enable mutual understanding. And the basis for that is respect for the country’s new Constitution enacted in 2013. As a citizen, Mrs Mugabe is free to associate and support Mnangagwa or whomever she chooses as her constitutional right, other Zimbabweans will exercise the same right—using the same freedom— without reference to her.”-Zimlive