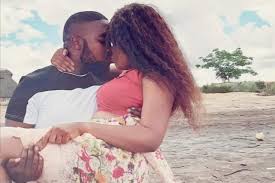 Comedienne, Mai Titi real name Felistas  Edwards has confirmed that her her toy boy Zizoe has fled the relationship with another UK based woman.

This followed a nasty exchange of words between the two when they were in the United Kingdom.

Mai Titi also accused Zizoe of bringing a woman, he confirmed was his girlfriend to the house they were staying in the UK.

He said he could not deal with her HIV status issues and needed a girlfriend which according to Mai Titi did not make sense to her.

“I will not allow anyone to tell me that no-one will ever love me if not me alone. I will say thank you Zizoe for loving me thank you ZizoE for appreciating me, thank you for standing by me in so many ways, for showing me kuti there is love at the end of the day and for being there for my children. But its not only you who can love me in my condition. You knew my condition from the word go you stood by me with that condition..”

She said she will not allow Zizoe to stigmatise her.

She said she met Zizoe when she was marketing his music but along the way “we fell in love. It was a marketing strategy but yakaguma irirudo. I do not know what happened to the love, maybe he was pressured.