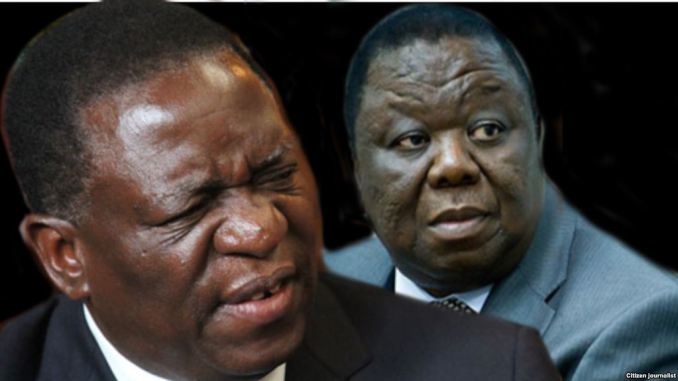 The claim was made by the cleric in an interview this week about the heady days during the coup which led to the resignation of former president Robert Mugabe. A close confidant of the veteran leader, Mukonori mediated between the military and Mugabe.

His account of the political manoeuvring after Mugabe’s ouster comes after the MDC-T denied its leader sought to be appointed vice president by Mnangagwa.

Presidential advisor Chris Mutsvangwa was scorned by the MDC-T after publicly accusing Tsvangirai of foiling Mnangagwa’s attempt to include opposition politicians in government by demanding an influential post for himself.

The MDC-T dismissed the charge, insisting that Mnangagwa never reached out to them before announcing his government.

However, Mukonori claims that it was Tsvangirai who tried, unsuccessfully, to seek a meeting with Mnangagwa before the latter appointed his Cabinet.

Reports the Jesuit Review, an American magazine which interviewed the cleric this week; “He [Mukonori] has been meeting with Morgan Tsvangirai, a former prime minister who had led the opposition to Mugabe through the Movement for Democratic Change Zimbabwe.

“Father Mukonori says that Tsvangirai wants to discuss a way forward for the country with the new president. But on the day of their second meeting, the newly inaugurated president announced his Cabinet.”

Tsvangirai’s wish, according to the magazine, quoting Mukonori, “would have been that they discussed the issue before the new president announced his new government.”

After Mugabe eventually stepped down, there was widespread expectation that Mnangagwa would likely appoint a unity government, including opposition politicians and technocrats to help stem an economic crisis that has lasted nearly two decades.

However, the new Zanu PF leader disappointed those expectations, after appointing ruling party officials, military generals and a couple of technocrats to his Cabinet.

Mutsvangwa later claimed that a reach-out to the opposition had been stymied by Tsvangirai who allegedly demanded to be appointed vice president.

The claim was furiously denied by the MDC-T.-standard