PRESIDENT Robert Mugabe’s sons Robert Junior and Bellarmine Chatunga — notorious for a wild partying lifestyle — have been hit with a R780 000 (US$60 000) bill after leaving a trail of destruction at the Sandton penthouse they were evicted from following a dramatic and violent brawl in July, the Zimbabwe Independent has learnt. 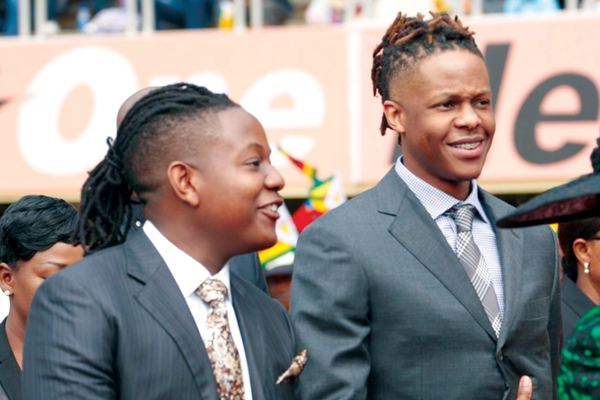 The boys were recently evicted from a luxurious apartment in South Africa’s most affluent area of Sandton in Johannesburg after the fracas that left one security officer with a broken leg and arm.

Informed sources in Harare and Johannesburg told the Independent that the Mugabe’s boys, known in social circles for hanging out with a harem of trendy young ladies, drinking binges and alleged drug abuse, as well as splurging money like confetti, were booted out of The Regent MCC luxury apartments located at Number 21 West Road South, Morningside in Sandton, Johannesburg, where they destroyed property and stained carpets.

Sources said the The Regent MCC manager has written to the First Family informing them that R780 000 is needed to repair the apartment.

Reports in the South African media and separate checks by the Independent — which has been investigating Grace’s property story and her sons’ escapades in Johannesburg — show that she has been renting a huge property owned by Angolan immigrants for R200 000 (more than US$15 000) a month. Investigations and reports show the rented six-bedroomed property is Number 27a Coronation Road, Sandhurst, Sandton’s most affluent suburb.

The price of the property on Killarney Road could go up to a whopping R49 million (US$3,7 million) when transfer costs, renovations and finishings are added.

Robert Jr and Chatunga were kicked out of apartment number 601 at the 10-storey block which costs up to R74 000 (US$5 606) per month for a four-bedroomed floor. The facility has a five-metre-high perimeter fence, a double gate, 24-hour entrance security, fingerprint-secured elevator entry, a spa, gym and restaurant.

Sandton, which has a deluxe shopping mall which the boys frequent and affluent suburbs, is Africa’s richest square mile.

This comes after the two boys and their friends recently painted the town red during a birthday party of one of them.

Sources said the boys lived large: apart from staying in the luxurious apartment, they were usually chauffeured in luxury cars, while also enjoying the services of a chef and a dozen security details.

“The boys were usually up during the night partying with different ladies, drinking and smoking. There were almost daily complaints by other tenants about the noise coming from apartment 601, the smell of cigarettes and drugs that wafted regularly up and down the elevator shaft or off the spacious terrace that showcased Sandton’s beautiful, modern skyline,” one penthouse resident at The Regent said

A source said they spent money all over Johannesburg, including at a famous Sandton night club, Taboo, and in Sun City, South Africa’s premium tourist and weekend destination with a host of hotels, remarkable attractions and entertainment famed for golfing, game viewing and water sports.-AMH