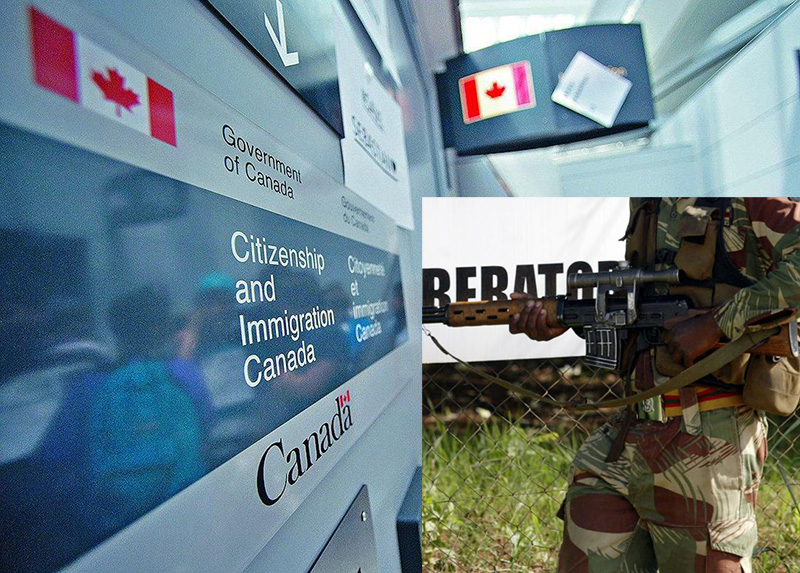 One of the unusual arguments the Tapambwas made was that Richard Tapambwa faced an additional risk of being mistaken for his identical twin brother, if he is sent back to Zimbabwe.

TORONTO: A husband and wife from Zimbabwe who were found complicit in crimes against humanity for their years working together in the Zimbabwe National Army have lost their legal appeals to avoid deportation from Canada.

Richard Tapambwa served in the Zimbabwean National Army for about 20 years; his wife, Stensia Tapambwa, served for about 16 years. Both were promoted to the rank of staff sergeant in the army’s data processing unit.

Their military service took place when the army was under the authority of former president Robert Mugabe, who faced condemnation for human rights abuses and crimes against humanity.

The couple told Canadian officials that after Richard Tapambwa expressed political views against Mugabe’s ruling party in March 2001, they left Zimbabwe and travelled to the United States, where they lived for more than 10 years without applying for refugee protection.

In 2011, they came to Canada and claimed political asylum.

The following year, their claim was denied because the Immigration and Refugee Board found serious reasons to consider they were complicit in crimes against humanity committed by the Zimbabwean army during their military service. The specific allegations against them are not detailed in recent court decisions.

Not willing to be quickly deported, the couple requested a Pre-Removal Risk Assessment, known as a PRRA, and also asked the minister of Citizenship and Immigration to lift the narrow restriction on PRRA requests that is applied to war criminals and those found complicit in crimes against humanity.

The international principle called non-refoulement means that refugee claimants typically cannot be returned to a place where their life or freedom would be threatened because of race, religion, nationality, membership in a particular social group, or political opinion.

Under the United Nations’ refugee convention, however, non-refoulement does not apply to claimants who are excluded from refugee status for crimes against humanity.

Their request was denied and they were found not to face a personalised risk to their life or of cruel and unusual treatment or punishment if returned to Zimbabwe. Their subsequent appeals continued to delay deportation.

They appealed the decision on their PRAA, claiming it violated Canada’s Charter of Rights, arguing about interpretations and parsing the language in the law and the UN convention — including the verb tenses used.

One of the unusual arguments the Tapambwas made was that Richard Tapambwa faced an additional risk of being mistaken for his identical twin brother, if he is sent back to Zimbabwe.

His brother, according to court files, was accepted as a refugee in Canada. He fled Zimbabwe after uncovering and threatening to expose a fraud involving his superiors in the Zimbabwean army.

Canadian officials confirmed he has a twin but found it “speculative in nature” that he might possibly become the victim of mistaken identity.

A fortuitous decision, however, threw them a lifeline.

Eight days after their request for a judicial review of the decision was dismissed by the Federal Court in 2013, the Supreme Court of Canada made a ruling in a case known as Ezokola v. Canada that changed how complicity is judged.

Rather than mere membership in an organization that is guilty of crimes against humanity, a refugee claimant must now be found to “voluntarily made a knowing and significant contribution to the crimes.”

The change replaced “complicity by association” with a new test of “complicity by contribution” and the Tapambwas wanted to have their case reconsidered under the new standard.

A PRRA officer had decided he had no jurisdiction to review an admissibility decision.

“They contended that as they had been excluded on the basis of their complicity by association, the legal basis of the exclusion finding had evaporated,” said a Federal Court of Appeal decision last week.

They lost on both counts.

“The legislation says nothing that would give the PRRA officer authority to reverse a finding of inadmissibility or exclusion. To the contrary, Parliament has put that responsibility elsewhere,” Justice Donald J. Rennie wrote on behalf of a three-judge panel.

To give the officer deciding the PRRA the power to reconsider the whole case of a failed claimant would give that officer a power that is withheld even from the minister of immigration, Rennie wrote.

As for whether they should be able to start again and have their case reheard under the Ezokola test, this too was rejected.

“The exclusion finding was final. There was no further right of appeal, review or recourse under the (immigration act). All of these decisions took place prior to Ezokola,” Rennie wrote.

“The appellants’ exclusion was finally determined on the basis of the applicable law at that time.”

Their appeal was dismissed, leaving few options barring their removal. The Tapambwas lawyer could not be reached for comment on Sunday.