Former Zanu-PF National Assembly representative for Bikita West Munyaradzi Kereke has “unreservedly” apologised to former Reserve Bank of Zimbabwe Governor Dr Gideon Gono for tarnishing his image by making corruption allegations, which have now turned out to be false. 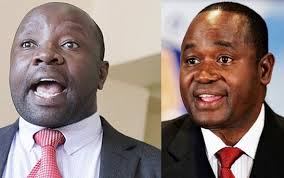 Kereke, who is serving a 10-year sentence at Chikurubi Maximum Security Prison for raping a minor, spoke exclusively to The Sunday Mail last week, saying he had withdrawn all court cases against Dr Gono who has given “credible and plausible explanations on a lot of the grey areas” that had caused problems between the two.

Dr Gono’s former advisor at the RBZ went on to apologise to Zimbabwe’s leadership for tarnishing the country’s image, saying he and his former boss had not listened to President Mugabe’s advice on conflict resolution. Dr Gono could not be reached for comment as he was said to be out of the country.

“More like fighting, but both of you are on a cliff. You can almost imagine what would happen. You are on a cliff and you are busy brawling. You may roll over and the results would be casualties beyond yourselves. It affects family, it affects the image of the country. It affects a lot of other things.”

“So I withdrew all my cases from the courts and elected that path where parties should really talk over as a way to get an end to this. And also factually, Dr Gono was able to give credible, plausible explanations on a lot of the grey areas that had caused us problems,” said Kereke who was in high spirits with a huge Bible by his side. Pressed to explain what really went wrong since the two had an “excellent” working relationship at the RBZ, Kereke said: “I think Dr Gono would be the best person to respond to that. You know, when two parts of the same body are attached and you separate them abruptly, there is trauma. There is bleeding. The part that has been amputated will remain with questions, but I want to say all of that is in the past now. All of that is in the past.”

Kereke explained how the dispute started, saying at one point when he returned to work from his annual leave, he was shocked when he was denied access into the Central Bank.

“Just so you know, I went on leave; it was in December. In January, when I drove to work, the doors were closed. No discussion, nothing. So, a lot of the issues about what went wrong, I would not be the best person to answer.

“But I want to insist again, this is now in retrospect. Whatever it was, I want to believe it’s finished now. We are now on the same page. We are now people who have found common ground.

“We have been communicating through lawyers, wanting to clarify areas where we had differences. I want to say that process went on very smoothly and cordially because either side wanted real closure, to get to the bottom of things. So, yes, we communicated through our legal counsels.”

Kereke added: “But the moment communication was opened, he was able to say ‘Ahhh, munin’ina, you know what, these funds whereas from the information you had, the file which you had, this went to Air Zimbabwe, this went to Zec’ and so on.

“We reconciled and I said, ‘Ahh, mukoma, this is correct.’

“So, there is no issue. We were able to tick line by line all these things and cleared all the grey areas. I came to the conclusion that there was perhaps on the part of my brother. . .he ought to have communicated better so that there was proper synchronisation of information.”

Asked whether he regrets what he did to Dr Gono, Kereke was emphatic in his response.

“Very much so. In fact, in my statement, I said things could have been managed differently and better perhaps,” he said.

Kereke went on to explain that he was making the apology out of his own volition.

“We had driven each other to the cliff where everything was embarrassing now. We were losing face even to our wives and to our children. So, sense had to come in. We realised this is not good.

He went further to exonerate Dr Gono from all the corruption allegations he levelled against him.

Asked whether Dr Gono was corrupt, Kereke responded: “He is not. This has come about, you know, when you block dialogue, no pressure moves anything unless it’s contained. If you boil water, close it in a can, it blows up the thing. There is no movement.

“I think we didn’t share information as much as we have now done. We didn’t explain things because there was that sudden amputation. So, the question was: These things that I have, could they be the ones; the reasons I have been shunted out? Or what is it? But through dialogue, you then see that you join the two pieces together and they make a logical story which is quite plausible. . .

“Dr Gono and I, we were beyond workmates. We were like brothers. I think that’s perhaps the reason why the dispute had to go to such extremes. When you go to brothers who are very close, more like your own arm, you wake up one night, zaaappp, it’s taken off. There would be trauma. Any small glitch tends to snobble into a bigger dispute.

“Having said all this, I tendered my apologies to Dr Gono and his family to say, ‘Ahhh, mukoma, let’s be sensible. Regardless of whatever you had done, muri mukoma, muri mukuru kwandiri. You are my brother. I am sorry for the way I acted.’ He accepted the apology. Likewise, he said, ‘Munin’ina, whatever went wrong at any stage in our relationship, know that I have forgiven you and we want to live normally.’

“That’s at our level. But to the country, with a very clear conscience, I want to profusely apologise to the country’s leadership and the nation at large. To say really this brawl with Dr Gono risked tarnishing the image of the country. It was not good at all. We could have acted better and in a different way.

“I have an example. His Excellency always says, ‘Mukanetsana, even at party level, regardless kuti umwe atora dhongi remunhu or mbudzi, try to resolve the issue quietly muri kumacorner.’ I think, in a way, Dr Gono and I hatina kuteerera that advice. Fortunately, we have come to realise that it was the right advice.”

Kereke said he was aware that the dispute had affected Dr Gono’s businesses and his standing in the eyes of his partners.

“People were throwing sling-shots. If you google the speeches he would give, sometimes the jabs he would give, offensive language that also came from me to him. It affects relationships.

“So, to the business community, honestly and with all sincerity, take it from the fact that the two parties have now reconciled. They did all they did in the midst of a conflict which was mishandled by both parties. We are pleased that it is over.”

Kereke explained that he had chosen to speak through The Sunday Mail because of its credibility and remarkably high circulation figures.

“I think it’s about credibility. The tragedy with our media these days is that they can turn something which is virtuous into something awfully terrible, depending on which side of the political equation that journalist is.

“I know certainly that The Sunday Mail has credibility, believability among the public. It’s also about circulation because we want people to know that the yesteryear conflict is no more. We have reconciled. We are one family.

“If Dr Gono were to bring me on a public holiday, we have the forthcoming Easter Holiday, cooked beef in a lunchbox, I would eat it without doubting or suspecting that there could be something in it. He can bring me a cup of coffee. He knows my sugar levels in tea. I take it without asking. So, it is at that level that we have come to reconcile.”

Asked what lessons he had learnt from the way he had handled the dispute with Dr Gono, Kereke said: “First, my advice to bosses is: If a junior has done something which you feel is not in congruence with what you would want, communicate effectively.

“You don’t lock the door and assume you have communicated. So, our separation with Dr Gono created the false impression that we had a lot of bad issues against each other. I couldn’t understand why all of a sudden I was shut out. So, it’s communication.

“Secondly, resolve your disputes as much as possible through dialogue. It is the right way. The results are much, much more effective. Look, we could have dragged each other to the courts, but the moment we took the dialogue way, information started to flow, exchanging files which clarified a lot of issues.”

He went on: “And we were saying, ‘What was the problem.’ All these years fighting when all these grey areas could have been cleared in a matter of a few weeks through proper dialogue. So, my advice would be don’t choose the aggressive path of fighting. If anything, embrace each other in the context of your difficulties; put communication and sensibility ahead of everything else.

“But in our own culture and even Biblically, I can’t remember which verse it is, which says, ‘Do not speak angrily to someone older than you’. I think I went off the rails. He could have come, poured hot water on my face. He could have come and insulted me in any way. . .I ought not have reacted the way I did.

“It was wrong and very, very bad. And I am sorry for that. . . Let me state it again boldly, handina kufoswa. It’s the conscience to want to do the right thing.”