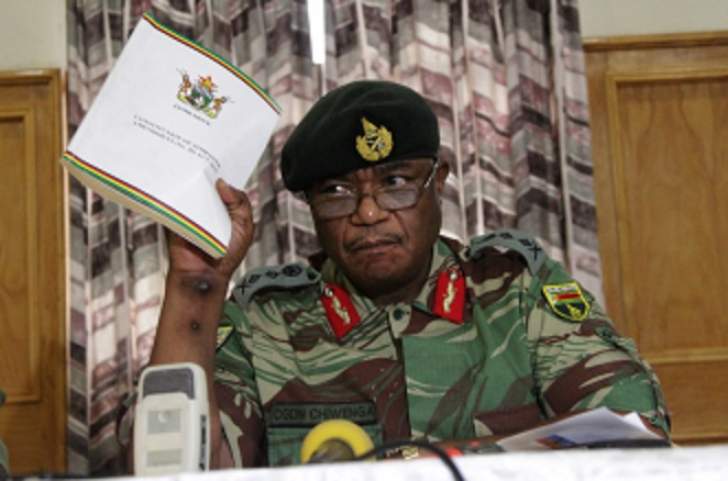 Chiwenga is seldom at his Munhumutapa offices, where he goes mainly for official government meetings and engagements, while politically running the country from the defence college, the OPC officials said.

BERLIN– President Emmerson Mnangagwa, is reportedly going to be viciously toppled from power in a catastrophic manner, that will include a combination of mass civil revolts and militia-like insurrections, which will leave the army with no option, but to step in to prevent the risk of a fully fledged civil war, Spotlight Zimbabwe, exclusively reports today.

Main opposition leader, Nelson Chamisa, has already warned that the country is on the brink of a civil war, as the political and economic situation continues to deteriorate, with food and fuel shortages and the health and education sectors all but collapsing.

Office of the President and Cabinet (OPC) officials together with two serving cabinet ministers from Mnangagwa’s twilight administration citing intelligence reports and documents, last month told this publication that they believe a “partial putsch” has already taken place, as the country is now thought to be completely run by the Joint Operations Command (JOC) on a day to day basis, with a new administrative command center based at the military’s defence college in the capital, from where Vice President, Rtd General Constantino Chiwenga, now works and is based it has been revealed.

Chiwenga is seldom at his Munhumutapa offices, where he goes mainly for official government meetings and engagements, while politically running the country from the defence college, the OPC officials said.

JOC is a shadowy quasi military organ, bringing together the country’s military-security complex which includes the army, and its military intelligence wing and Presidential Guard, Air Force, Police, Prisons and the Central Intelligence Organisation (CIO) to manage homeland and foreign security affairs.

“The classified intelligence reports prepared by the CIO in December 2019, suggest fears of an all out vicious civil uprising and demonstrations by the opposition MDC against the president,” OPC sources said.

“These anticipated protests are going to be catastrophic, leading to the president’s ouster. A hidden third hand is going to foment chaos and militia-like insurrections, leading to unseen bloodshed and destruction of business properties in the central business district, as that part of the primate city is going to turn into a warzone, where MDC supporters will engage in violent clashes with Zanu PF youths, sent by the party leadership to counter the opposition’s protest campaign.”

Last April, former Bulawayo South MDC legislator, Eddie Cross, claimed that G40 members who were expelled from Zanu PF are buying weapons to wage war in Zimbabwe, during a presentation at a Press Club in Capetown.

“Mnangagwa is committed to reform; he has not received sufficient recognition for what he has done. But he has to deal with recalcitrant elements in his party; intelligence sources suggest G40 is buying weapons,” Cross said.

One of the ministers said he had it on good authority, that the army was already conducting drills to deal with the imminent demonstrations by militia elements and opposition supporters.

“The National Reaction Force is on standby throughout the whole of 2020 to quell these deadly clashes and demonstrations which the MDC has been planning, with the intention to make the country ungovernable, and cause a constitutional crisis to force for a transitional authority, that will run government until elections are called,” said the minister who’s also a Zanu PF politburo member.

“This is going to backfire against both the MDC and unfortunately our leader too. Why? The military thinks ahead, and I have received confirmation from senior army officers, that in such a scenario, they (Army) will call on Chiwenga to be interim and transitional president of the transitional authority to avoid Sadc intervention or the sending of foreign peacekeeping troops to Zimbabwe, should things run out of control. The VP will form that tranistional government instead.”

Spotlight Zimbabwe, reported in March 2019 based on information from diplomats in South Africa, that the United Nations Security Council was likely going to approve the intervention of a multinational force to Zimbabwe, to disarm and disable Mnangagwa’s regime, should the army brutally crackdown on unarmed protesting civilians again and cause deaths by pumping live ammunition to contain the discontent.

The envoys warned that Zimbabwe was unlikely to get away with murder, following the shock military shootings in August 2018 and January last year, that left a swathe of terror and at least 17 extrajudicial killings, 16 rapes, 26 abductions and more than 600 assaults, according to the Zimbabwe Human Rights NGO Forum.

Although the UN has no standing peacekeeping force ready to be deployed, one Western powerhouse (name supplied) at the time said to be “sympathetic with the people of Zimbabwe” and appalled by Harare’s worsening violation of human rights was said to be willing to take up the mission, and was working on asking the Security Council to approve the intervention of the multinational force operating under Chapter VII authority.

It also allows the Council to “determine the existence of any threat to the peace, breach of the peace, or act of aggression” and to take military and nonmilitary action to “restore international peace and security”.

Chapter VII also gives the Military Staff Committee responsibility for strategic coordination of forces placed at the disposal of the UN Security Council. It is made up of the chiefs of staff of the five permanent members of the Council.

Another cabinet minister said Chiwenga had not only received endorsement from China to be the next president, but from a couple of other foreign powers, including Russia, who did not want the country to slide into civil war.

“I will share this with you because it is not an official state secret,” she said. “The VP not only has the endorsement of China, but a good number of other foreign powers are now lining behind his bid for presidency, including Russia. They want to do big business with Zimbabwe on the mining front, and the gateway to that is the Zimbabwe Defence Forces (ZDF), who now have huge stakes in the country’s mineral wealth especially platinum, uranium, lithium, gold and diamonds. As we speak Russia is on the verge of securing rights to some of our virgin uranium deposits and so are the Chinese, and Iranians.”

Zimbabwe and Russia last year agreed terms to engage in uranium exploration and enrichment in a bid to begin generation, and solve Harare’s electricity woes in the long term. The agreement was signed by foreign affairs minister, and Chiwenga inner circle ally, Sibusiso Moyo.

Moyo visited the Kremlin in August 2019, where he signed a Memorandum of Understanding (MOU) for cooperation in the “peaceful use” of nuclear power.

“This was cooperation in exploration and other areas and research in as far as peaceful use of nuclear is concerned,” said Moyo according to African Mining Brief. “When we say peaceful use of nuclear energy, it is one of the areas where power can actually be generated from in as far as that is concerned. It is not so much about being implemented but it is an agreement which conjoins the two countries for research.”

Moyo according to the report, co-chaired the Third Session of the Inter-Governmental Commission on Economic, Scientific and Technical Cooperation between Zimbabwe and Russia from 5 to 7 August in Moscow alongside Russia’s Environment Minister Sergey Yefimovich Donksoy.

Publisher and political analyst, Ibbo Mandaza, recently told South African national broadcaster, Sabc, that Mnangagwa had lost China’s approval, and that his government is the worst he has ever seen in his life.